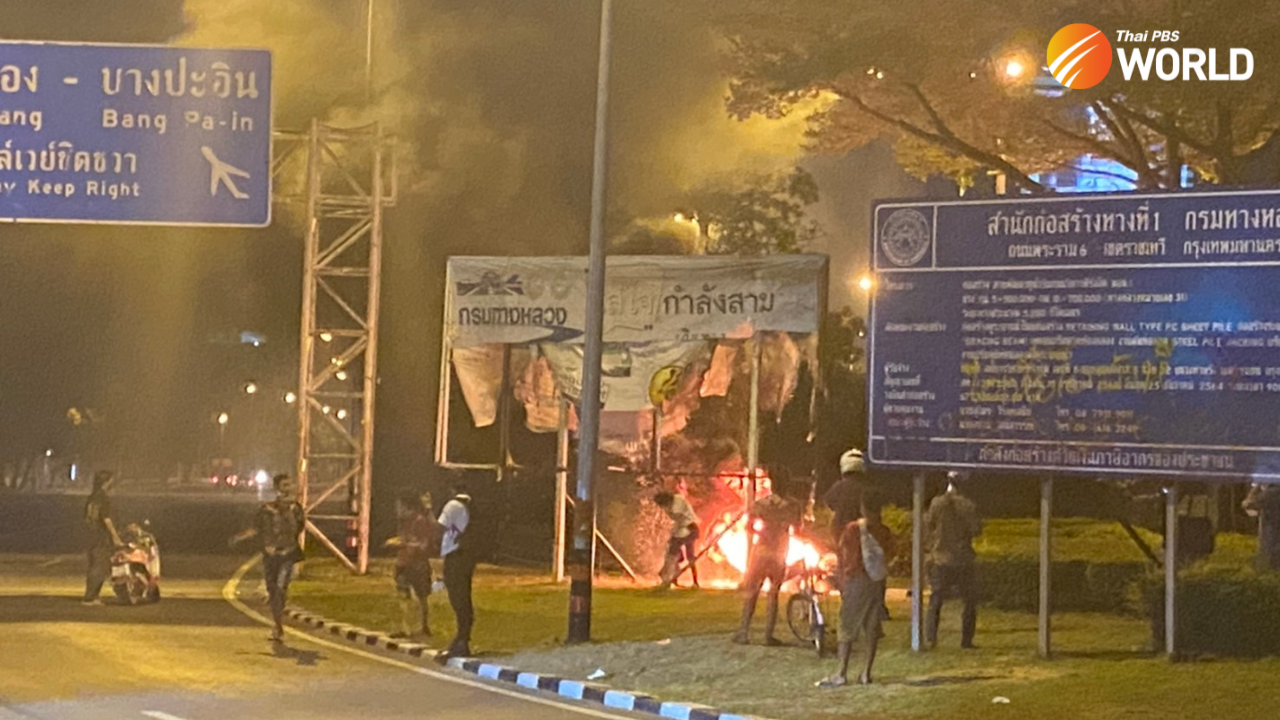 Recent weeks have seen the emergence of youth-led violent protests at Bangkok’s Din Daeng intersection – in what observers view as a strategy to help support the mainly peaceful anti-establishment movement.

Calling themselves Talugas, the usually small groups of protesters come armed with slingshots, firecrackers and small explosives known as “ping-pong bombs”. Clashes then occur with crowd-control police but the protesters often flee the scene as soon as officers begin firing tear gas and rubber bullets.

Talugas protesters are accused of setting fire to police vehicles and traffic control kiosks around the Din Daeng intersection.

Talugas first emerged in early August, when other anti-government groups held “car mob” rallies through Bangkok to demand the resignation of Prime Minister Prayut Chan-o-cha over the government’s handling of the pandemic.

Since then, the militant young protesters have gathered almost every evening at the Din Daeng intersection near Victory Monument, threatening to march to the PM’s residence at the First Army Infantry base. The triangular junction of Ratchawithi, Ratchaprarop and Din Daeng roads has become the nightly battleground for Talugas and police, with numerous injuries on both sides.

The latest wave of anti-establishment protests has failed to draw the large crowds achieved last year. The shrinking of rallies is blamed on the new COVID-19 outbreak and the fact that many key protest leaders have been arrested.

Meanwhile, critics say the violence-prone leaderless mobs have tarnished the cause of other anti-Prayut protesters. Their frequent clashes with police also appear to have discouraged potential protesters from joining rallies. As a result, rally organizers have disavowed Talugas, while some protest leaders have urged them to hold separate demonstrations.

The group sought to justify its violent approach in a Facebook post on August 26. “Non-violence is not the only peaceful means to fight against this cruel government. [Violence] is the only option for the oppressed. This is peaceful as long as it is not meant to take any lives,” said the post

The group’s name is apparently inspired by “Thalu Fah” (Through the Sky), which is the main organizer of the latest wave of protests. While the “sky” here refers to the elitist establishment, “gas” in Talugas is thought to derive from the use of tear gas by crowd-control police.

Talugas consists mainly of vocational students and working-class teenagers angered by the government’s management of COVID-19 and its economic fallout, according to reporters covering the clashes in Din Daeng.

Many of the protesters are said to come from poor urban families who migrated from the provinces.

“They are the most powerless group in Thai society …  and have never been on the media radar,” writes political commentator Nidhi Eoseewong at the Prachatai news website. Derogatory labels applied to this group – including “dek wan” (racing kids), “slum boys” and “kha jo” (young troublemakers) – reflect the “structural violence” of Thai society against its poorest members, he adds.

Many claim the Talugas protesters have been hired as provocateurs to cause violence. Others view this group as the anarchic arm of the anti-government movement, part of a two-pronged strategy to deploy “peace” and “chaos” in the battle against the government.

Dubbed “Din Daeng warriors” by their supporters, teenaged Talugas have told reporters that the government’s COVID-19 restrictions have deprived them of their adolescence.

Political activist Aekachai Hongkangwan says the intersection is a smart choice for their battleground, as its strategic location offers them a huge advantage over the crowd-control police.

He explained that protesters can easily escape through the many connecting roads and alleys nearby. The area is also surrounded by private residences, which obstructs police deployments. It also allows protesters to gather upwind of the police, helping them to avoid tear gas.

Stithorn Thananithichot, director of the Office of Innovation for Democracy at King Prajadhipok’s Institute, believes Talugas rallies are unlikely to weaken the wider protest movement. Although violence may happen due to the group, the big movement will still exist, he said.

“The youth-led anti-establishment movement, in principle, was initially formed with diversity and without the need for unity. They don’t need a leader as they believe that anyone who shares their common goal can be a leader,” the analyst said.

The Talugas group was formed as a way of expressing their discontent with the government, he added.

Stithorn said the protesters were displaying their anger at police blockading their marches to Prayut’s residence while opposing the use of tax money to protect a PM they want to oust.

“The demonstration is a symbolic fight. They see shipping containers [blocking their way] and crowd-control police as obstructing freedom. They don’t want to use violence to generate turmoil or sabotage,” the analyst said.

Regarding concern their rallies may bring more violence and casualties, Stithorn said the strategy differed from rallies decades ago – like the Bloody May protests of 1992 – when protesters on motorcycles burnt down police kiosks. He called that “old-style violence”.

Stithorn, who has visited the Din Daeng rally as an observer, identified several subgroups of protesters alongside the hardcore vocational students who make up Talugas. Among them was a small group of students who joined the rally after school, he said.

“They told me they carried firecrackers in bags and distributed them to protesters on the frontline. They act as reinforcements,” the academic said.

Stithorn is doubtful protesters will be able to topple Prayut despite their almost daily rallies.

“However, [what they can achieve] depends on how they define success,” he added.

While they may fail to overcome the police barricades, their rallies could be successful in turning the surrounding community into supporters of their cause.

A group of tenants from the nearby Din Daeng flats recently submitted an open letter to PM Prayut, asking the government to soften its approach to the almost daily protests in their neighborhood.

Stithorn voiced no concern about possible serious casualties from the rallies.

“The protesters’ clash with police is meant to be symbolic. They often recede when police take serious actions,” the academic said.