Party spokesman Sok Eysan said  that based on the results shared by the National Election Commission, none of the other 19 parties has won a single seat.

“The CPP won 77.5 percent of the votes and won all the parliamentary seats,”  Sok Eysan told Reuters by telephone. On Sunday the CPP said it had won “at least” 100 seats.

The election was branded as a sham by Hun Sen’s critics and criticized for not being free and fair by western countries.  The main opposition, the Cambodia National Rescue Party,  had been dissolved prior to the election on charges that it tried to topple the current Hun Sen government.

On his Facebook page, Hun Sen thanked Cambodian people for choosing the path of democracy.  The result of the election will extend his 33-year role for at least another five years. 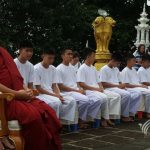 Thais stranded in Lombok being brought out to safety