About 200 local and border patrol police are hunting for two fugitives and their helpers who are believed to be on the run near the Thai-Cambodian border in Sa Kaew province in an apparent bid to flee into Cambodia.

A female fugitive, Ms. Skrinnapa Wisetrith, and another person suspected to be among those who assisted three criminal suspects to escape from the Pattaya provincial court, were arrested by police Tuesday night in a white car in Khao Chakan district.

Police said the two remaining fugitives and one helper are believed to be in Ban Tap Chang or Ban Nong Pla Seng, about 30 kilometres from the Cambodian border.

Police were reportedly told, by two assistant village heads in Ban Khao Chan, that a suspect car had been spotted at an abandoned house in the village yesterday.

The three drug suspects, identified as Noi Niltet, Ms. Sirinnapa Wisetrith and Mr. Bart Allen Helmus, escaped from the court on Monday afternoon as they were being escorted to the court for a hearing. A group, armed with knives, attacked the police escort and escaped, with the suspects, in a waiting car.

A 50,000 baht reward has been offered for information which leads to the apprehension of the three fugitives. 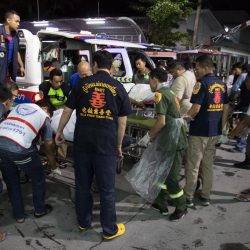 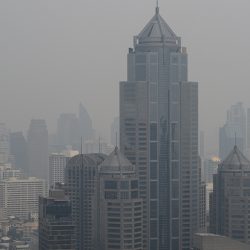 16 areas in Bangkok and suburbs at risk of smog today