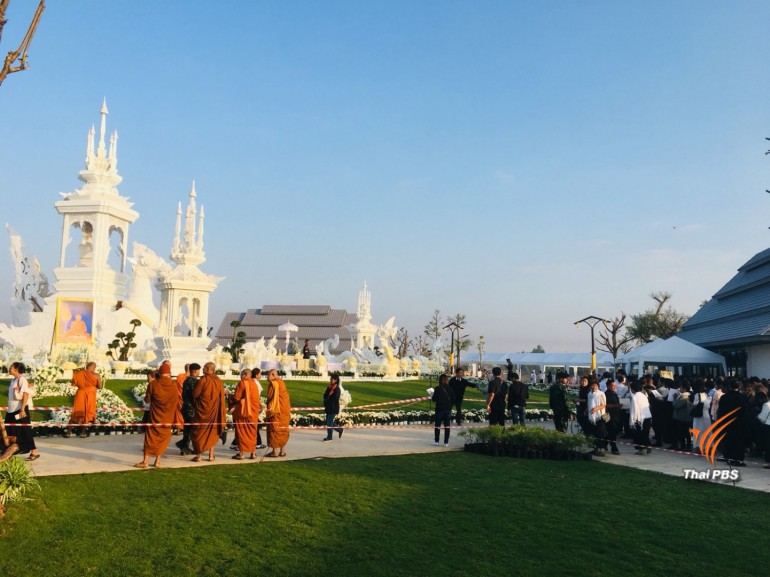 Tens of thousands of worshippers have been flocking to the northeastern province of Khon Kaen over the past few days to pay their last respect to the late Luang Phor Koon Parisutho, the highly-revered abbot of Wat Ban Rai in Nakhon Ratchasima province, ahead of his cremation on Tuesday.

Many of the worshippers were preparing to spend the night in Khon Kaen so that they would be able to arrive at the temporary crematorium behind the Buddhamonthon where they are to place sandalwood flowers as a show of reverence.

Even for the early arrivals, they had to queue up in long lines waiting for their turns to place the sandalwood flowers before the noon-time deadline when the flower laying was due to stop as officials would make preparations for the Royally-sponsored cremation tomorrow.

Turnout at the cremation ceremony to be held at Wat Nong Wang is expected to be massive with as many as over one million worshippers anticipated, which would pose a traffic nightmare for authorities concerned.  It was reported that all hotels, service apartments and hostels in Khon Kaen were fully booked.

Luang Phor Koon died in May 2015 and his body was donated to Khon Kaen University’s medical school for study.  After the cremation, his ashes will be scattered in the Mekong River in Nong Khai province.