The President of Thailand’s Parliament, Chuan Leekpai, opened the extraordinary session of Parliament this morning with a warning to all MPs and senators to refrain from offending the Monarchy and from using vulgar language.

Taking the floor of the general debate on the current political conflict, Prime Minister Prayut Chan-o-cha told Parliament that his administration accepts that some changes must take place in the country, in line with global changes, but there are millions of Thai people who don’t want to see changes which may cause chaos.

He insisted that the Government has the responsibility to protect the rights of all Thai people and to ensure peace and order, adding that he does not want a riot or to see clashes between people of opposing ideologies.

Referring to the anti-government protests, which have been taking place since October 13th, the Prime Minister maintained that the police have shown restraint in the performance of duty, by warning the protesters that they are breaking the law before taking action, which is within the framework of the law and international standards, “but the protests still escalate,” he said.

He also said that the protests have been largely peaceful, adding that there had been some isolated inappropriate incidents.

He expressed optimism that MPs and Senators will use their wisdom during the general debate today and tomorrow, to work out some sort of solution to the current conflict.

Meanwhile, Opposition leader Sompong Amornvivat told Parliament that he was disappointed with the Government’s three proposed motions, accusing them of not being constructive and likely to exacerbate the political divide in Thai society.

He described all the measures, adopted by the Government to deal with the protests, as pouring fuel on the fire.  He also accused the administration of being a complete failure in governing of the country, be it economically, socially and politically.

The Pheu Thai Party leader urged the Government to accept, for serious consideration, the protesters’ demands to speed up the constitutional amendment process, to release all protesters held on remand and for the Prime Minister to resign.

Related story: Thai parliament to discuss political situation and reform of the monarchy 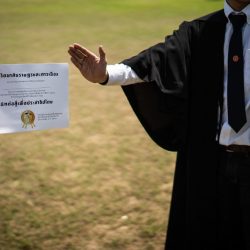