The provincial health chief of Thailand’s southern province of Nakhon Si Thammarat has ordered all state-run hospitals in the province to stop using the Chinese-made Lepu rapid antigen test kits (ATKs) due to a high percentage of inaccurate results.

Dr. Charaspong Sukree, the provincial health chief, 1,000 people in Thung Yai were tested using Lepu ATK’s, which produced 187 positive results for COVID-19. When this “infected” group was subjected to RT-PCR tests, only 92 turned out to be infected.

“This represents 50% false positive, which cannot be accepted for use in hospitals because it is against the objective and unethical,” said Dr. Charaspong today, adding that he has already ordered all hospitals in the province to stop using the Lepu ATKs.

He maintained, however, that Chinese-made ATKs are not a problem “but they were not used for their intended purpose”, saying that these ATKs should be used on people at low risk of getting infected, not high risk people who must be tested with a more reliable tool at a hospital.

“It is OK for home use, if people want to use them, but not for medical professionals,” he stressed.

The Thai Food and Drug Administration has, however, approved the ATKs for home use, claiming that they have been approved by several European countries. 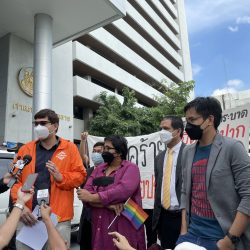