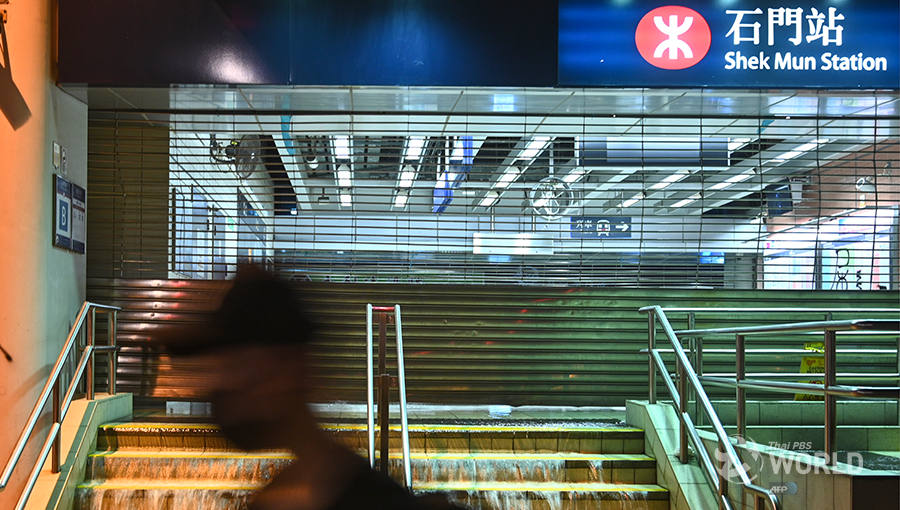 Protesters smash up a metro station in Shek Mun area of Sha Tin district in Hong Kong on late October 4, 2019, as people hit the streets after the government announced a ban on facemasks.

Hong Kong’s entire mass transit rail system was suspended on Saturday after a night of violence sparked by a ban on pro-democracy protesters wearing face masks, as the government invoked emergency powers not used in more than half a century.

The ban was aimed at quelling nearly four months of unrest but instead sparked widespread clashes and vows of defiance, with a 14-year-old boy reportedly shot and wounded.

Chief Executive Carrie Lam said she made the order under the Emergency Regulations Ordinances — a sweeping colonial-era provision that allows her to bypass the legislature and make any law during a time of emergency or public danger.

Protests immediately broke out across Hong Kong, initially with large crowds of office workers blocking roads in the heart of the commercial district.

Demonstrators later vandalised subway stations, started street fires and smashed the windows of pro-China businesses as clashes erupted throughout the evening. Police used tear gas in multiple locations to disperse protesters who had taken over roads.

“The government doesn’t listen to us. So we are upping our game,” said 32-year-old protester Nathalie, as hardcore demonstrators trashed the MTR station in the previously calm neighbourhood of Tseung Kwan O.

In the northern district of Yuen Long, a police officer opened fire when he was surrounded in his car and attacked by protesters, a petrol bomb exploding at his feet.

“A large group of rioters attacked a plainclothes police officer in Yuen Long district. The police officer fell onto the ground and was beaten up by the group. Facing serious threat to his life, he fired one shot in self-defence,” police said in a statement.

Also in Yuen Long, a teenage boy was shot and wounded by a live round, the South China Morning Post reported, citing a medical source. It was unclear if that round was linked to the plainclothes officer who opened fire.

As the city awoke on Saturday, train services remained shut — including the airport line — with the rail operator saying it would assess damage to stations before deciding when to reopen lines.

“An important moment has come for stopping the violence with a clearer attitude and more effective measures,” he added.

Critics said Lam’s move was a major step towards authoritarianism for Hong Kong, which has been governed by China under a “one country, two systems” framework since British colonial rule ended in 1997.

“She’s like a queen now,” said a 19-year-old student who identified himself only as JC.

In the United States, the Congressional-Executive Commission on China, at which Wong testified last month, said that using the emergency powers “will not address the grievances underlying four months of protests”.

The powerful US House of Representatives Speaker Nancy Pelosi separately said the ban “only intensifies concerns about freedom of expression”.

The ban came after the worst violence of the year, when China celebrated 70 years of Communist Party rule on Tuesday. During those clashes, an officer shot and wounded a teenager — the first such shooting since the demonstrations began.

The new law threatens anyone wearing masks at protests with up to one year in prison.

For one of those at Friday’s march, the ban would not solve the city’s woes.

“Youngsters are risking their lives,” a 34-year-old office worker wearing a surgical mask, who gave her first name as Mary, told AFP.

“They don’t mind being jailed for 10 years, so wearing masks is not a problem.”