The mysterious unmanned ship, which was found floating in the Gulf of Thailand about 100 miles off the coast of Songkhla province, sank on Saturday night, despite attempts by the Royal Thai Navy to save it.

Rear Admiral Surasak Pratarnvorapanya, director of the second fleet’s Centre for the Protection of Marine Interests, said today (Sunday) that the vessel could not be towed to the shore due to the rough seas and that it continued to take on water through the several holes on its hull.

The abandoned vessel finally sank about 28 nautical miles off the coast of Si Chon district of Nakhon Si Thammarat province, he added.

He also said that oil had started to leak from the wreck and the RTN’s second fleet had contacted an oil exploration company, asking them to send booms to be placed around the area to prevent oil slicks from spreading, which would pose a threat to the environment and tourism areas.

As the sea current is away from the wreck and toward Matsum Island, near Koh Samui in Surat Thani province, he estimated it would take 2-3 days to clean up the oil before they reach the waters around Koh Samui.

The senior naval officer admitted that investigators are still unable to determine the nationality or ownership of the sunken vessel, adding that it might have been decommissioned quite a while ago. 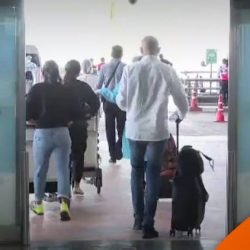 African tourists can apply for “Thailand Pass” under “sandbox” program