The Future Forward party leader Thanathorn Juangroongruangkit has been told by the deputy spokesman of Palang Pracharat, the core government party, to cease his divisive rhetoric which, he claims, is inciting public distrust and misunderstanding of the government.

Mr. Thanakorn Wangboonchana said today (Monday) that he felt very uncomfortable with Mr. Thanathorn’s statements, which he made made during his recent visits to flood victims, accusing the government of spending tens of billions baht of investment budget on implementing train projects in Bangkok while spending only a small fraction of the money to help flood victims.

Mr. Thanakorn said that Thanathorn’s rhetoric is dangerous and amounts to incitement of public misunderstanding using false information, stressing that the train projects are beneficial to the people and will bring prosperity to the country as a whole.

The deputy spokesman added that he had not expected Thanathorn to have such a negative attitude, which could fuel political divide among the Thai people.

Every individual or party has the right to call for constitutional amendments, but taking to the streets to press for the amendments, as advocated by Future Forward spokesman Pannika Wanich, will only cause an unnecessary public disturbance and will take Thailand back to the cycle of political conflict, said Mr. Thanakorn.

“Peace and order has been restored in the country, so do not push the country back into the old conflicts. The country has suffered enough. Think of something new which fits in with the party’s name of Future Forward,” said the deputy spokesman.

Queen Mother in hospital for examination 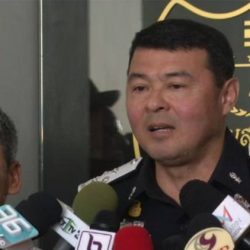