Future Forward MP for Chon Buri’s Constituency 7, Ms. Kavinnart Takhee, who twice voted against the party’s position, has been banned from engaging in party activities, pending a disciplinary probe.

Party secretary-general Piyabutr Saengkanokkul told the media today (Monday) that the investigation is to be conducted by a panel, led by party-list MP Chamnan Chanruang, and will begin after the by-election in Nakhon Pathom province on Wednesday.

The panel’s ruling will be submitted to the party’s executive committee for finalization.

According to the party’s rules, there are four steps to disciplinary action against a violator of the party’s rules, starting with a formal warning, then probation, then removal of certain membership rights and finally dismissal.

Ms. Kavinnart voted in favour of the Government’s executive decree on the transfer of army troops and budgets to the Royal Security Command, while 70 other party MPs voted against the decree last Thursday.  All the other opposition parties voted in support of the decree.

She also voted in favour of the Government’s budget bill last Saturday night, while all other opposition MPs abstained.

Piyabutr said that the party could not let its MPs vote against the party whip “otherwise there is no point to a political party.”

The Future Forward secretary-general also offered an apology to people in Chon Buri’s Constituency 7 for the selection of Ms. Kavinnart. 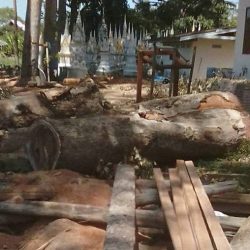