Construction of the Yellow, Pink and Orange train lines is now underway, causing heavy traffic jam in the areas of construction as well as adjacent areas.

Pol Lt-Gen Kraiboon Suadsong, commissioner of Police Strategic Office, said that, during the initial stage of the trial run of the three bus routes starting on September 1, six airconditioned buses will be put into service for Route 168.  Travelling time from the starting point to the destination is estimated at 2-3 hours.

He said that free bus trial run for the three routes will last about a month during which an assessment of public response to the service will be made.

This shuttle bus service will be another alternative for commuters to avoid using Ramkhamhaeng road, he said, adding that, in the future, the number of buses travelling along the Ramkhamhaeng road will be reduced.

He said BMTA was discussing with Expressway and Rapid Transit Authority to waive expressway fees for the free buses. 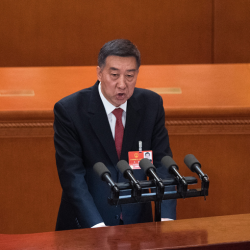