Food supplies at markets and supermarkets are reducing amid partial closures and subsequent reduced production capacity at almost 100 food processing plants nationwide, following the spread of COVID-19 among their workers. Some items have reportedly run out, with certain shops and stalls forced to close.

At a fresh market, in Bangkok’s Min Buri district, many fewer stalls were open than normal. For those which did open, for example a fresh chicken stall, supply was reduced to the point where it was not enough for its usual customers.

“Prices have increased by 5-7 baht, especially now when the chicken meat is lacking. The suppliers barely deliver because they don’t have any. They may have closed. At first it was the lack of supply, but now they’re scared of the infections,” Salakjai Kaewprasert told Thai PBS.

“I ordered a lot of things, but the suppliers don’t have anything to deliver. I ordered 20 and I received only 5. Normally they would deliver every day, now they deliver only once every two days, with very little supply,” said Nichakan Yodwian, a processed food vendor at the market.

For regular shoppers, the nearly empty shelves have also become a problem.

“When I go to the 7-11 nearby, or malls, they don’t have the things I want to buy. For example, they don’t have tomato sauce. The amount of pork and other meat remaining is little. Before, I bought a lot. Right now, the choices are very limited,” said Parinee Bamrungnok, a Bangkok resident visiting a mall.

At a mall, in Bangkok’s Sai Mai district, many shelves are empty, lacking items such as instant noodles, canned fish, snacks, boxed milk and meat. At a convenience store, in Bang Khen district, sausages and other ready-made food, including sweets, are at a low volume as well.

In a Thai PBS interview with Somchai Pornrattanacharoen, president of the Thai Wholesale and Retail Trade Association, it was revealed that production capacity at some food processing plants has reduced by 20-30% and that demand has surged recently, amid the current partial lockdown measures, while the production is “not yet back to normal.”

Meanwhile, President of the Thai Food Processor Association, Visit Limlurcha, said food processing plants are using the “Bubble and Seal” approach, in which infected workers were separated, and that active screening is conducted regularly, to allow production to continue and to avoid complete closure, which would certainly affect the food supply chain even more. 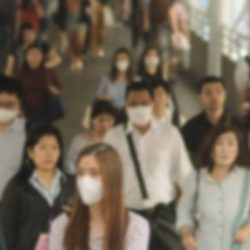 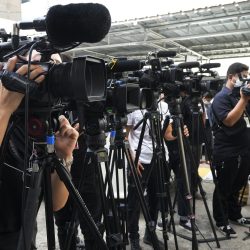