Rice farmers have been warned to stop drying their crops on roads or face legal action.

The instruction was issued today by the Nakhon Ratchasima provincial justice officer after a fatal road
accident on November 10 th on a highway in Tambon Makha, Non Soong district.

Two pickup trucks collided when the drivers tried to avoid driving over rice laid on the road surface to
dry, resulting to two fatalities and two others being injuries.

Mr. Wichien Chaisorb, director of the Nakhon Ratchasima provincial justice office, paid a visit yesterday
to the family of one of the dead victims, Mr. Nikhom Chitklang, to offer condolences and support.

He reportedly told the family that his office will provide legal assistance if they want to take action
against the farmers who used the public road as a place to dry their crops.

At the meeting it was agreed that there should be a ban on the use of roads to dry rice, with the Makha
TAO promising to find alternative space for farmers.

Sun-drying freshly harvested rice on local roads has been common practice for many farmers, so that
the crops fetch better prices. 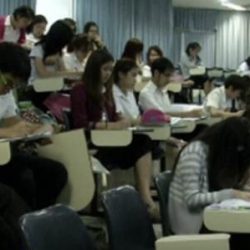