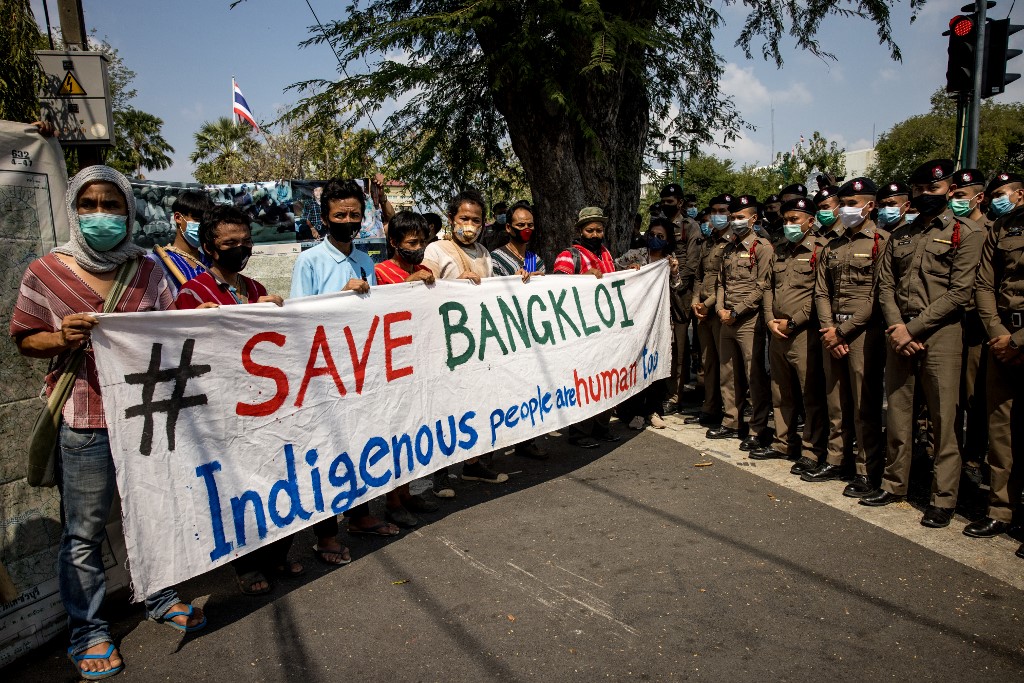 Protesters hold a “Save Bangkloi” banner in front of a line of police officers during a land rights demonstration held by members of the Karen indigenous community outside the Government House in Bangkok on February 15, 2021. (Photo by Jack TAYLOR / AFP)

This long-running dispute is seen as a key test of whether Thailand can find the right balance between preserving its forests and protecting the rights of forest dwellers.

When did the saga start?

Conflict between the authorities and ethnic Karen living in the forest has been simmering for decades. However, it first came under the spotlight in 2011, when three military helicopters crashed in the deep mountainous forest of Phetchaburi’s Kaeng Krachan district. Reporters who rushed to the scene found clues that one of the helicopters was dispatched to support a mission by park rangers to drive the Karen out of the forest reserve.

The national park’s chief at the time, Chaiwat Limlikit-aksorn, initially portrayed the Karen forest dwellers as a militia linked to the Karen National Union over the border in Myanmar. Investigative reports, however, revealed that these ethnic forest-dwellers were simply trying to reoccupy their old community after authorities failed to honour a promise to provide a new, viable site for their resettlement.

Emerging evidence showed that Chaiwat had led a mission, called “Tanao Sri Operation”, to torch about 100 Karen houses in the forest villages of Bang Kloi Bon and Jai Pandin. The stated objective was to protect the forest of Kaeng Krachan National Park.

The Karen’s spiritual leader, Ko-ei Meemi, told media that his people had been living in the villages long before the Kaeng Krachan National Park was founded in 1981.

Born in 1911, Ko-ei said he had lived in Jai Pandin from birth. His claim is backed up by a 1912 military map, on which Jai Pandin is clearly marked. An aerial photograph taken in 1972 also shows signs of life and farming around Jai Pandin.

However, ever since Kaeng Krachan National Park was established, residents of Jai Pandin and Bang Kloi Bon have been treated as forest encroachers by the Department of National Parks, Wildlife and Plant Conservation (DNP).

In 1995, Chaiwat’s predecessor as park chief, Samart Muangmaithong, persuaded the Karen residents of Jai Pandin and Bang Kloi Bon to relocate to a new site near Ban Pong Luek. The Karen quit their mountainous forest homes because they were promised land to grow their crops. The site of their new settlement is known as Ban Bang Kloi Lang and sits on the western side of the Phetchaburi River.

The resettlement would have gone smoothly if the land had been suitable for farming. However, the forest dwellers quickly discovered the land at Ban Bang Kloi Lang rocky and would not support cultivation. So, they decided to return to their old site. Their move back to Bang Kloi Bon and Jai Pandin triggered conflict with park authorities – which exploded with Tanao Sri Operation in 2011.

In 2012, Karen leader Ko-ei took the DNP to court for the torching of houses in Jai Pandin. Helping him with the case was his grandson, Porlajee “Billy” Rakchongcharoen, an environmental activist.

The Karen won their case. In 2018, the Supreme Administrative Court awarded compensation for the violent eviction.

However, Porlajee did not live long enough to witness this legal victory. He went missing in 2014 while preparing the lawsuit and campaigning for Karen people’s rights. He was last seen alive in the custody of Chaiwat and his team, who claim they caught him collecting wild honey in the park.

In 2018, the Department of Special Investigation (DSI) reopened their investigation into Porlajee’s disappearance. A year later they found burnt bone fragments in a barrel sunk in Kaeng Krachan reservoir. After finding that DNA from the bones matched that of Porlajee’s family, the DSI opened a murder investigation and named Chaiwat as the prime suspect. However, public prosecutors declined to accept the case and murder charges against Chaiwat and three of his men were dropped.

Earlier this year, Chaiwat was back in the spotlight after the Public Sector Anti-Corruption Commission resolved he should be dismissed from civil service for leading Tanao Sri Operation. Currently serving as director of Protected Areas Regional Office 9, Chaiwat is fighting the resolution.

Prime Minister Prayut Chan-o-cha has assured that all the ethnic Karen villagers, in Pong Luek Bang Kloy village in Phetchaburi’s Kaeng Krachan national park for each household, will have access to sufficient land on which to make a living and have a better quality of life, Ms. Ratchada Thanadirek, deputy government spokesperson, told the media on Friday.

While the Supreme Administrative Court awarded compensation to the Karen who lost their houses in the 2011 arson-eviction, the court ruled they had no right to return to their old community. The ruling was based on the fact that their old community is now part of the national park and they have no official documents to prove their rights to the land.

As such, officials have continued in their efforts to evict the residents of Bang Kloi Bon and Jai Pandin. Last month, helicopters were again dispatched to the site in an operation dubbed “Protect Petch Headwater Forests” that ended with the arrest of several Karen residents and forcible eviction of many more.

While Natural Resources and Environment Minister Varawut Silpa-archa stands by the operation, human-right activists are not happy.

Surapong Kongchantuk, a lawyer and veteran advocate for the rights of stateless and displaced Thais, pointed out that this Karen group have been living in this forest zone for generations and have in fact helped protect their natural surroundings.

“Why do the Karen have to be forced out when wild animals are free to remain in the forest?” Surapong asked.

Preu Odochao, a representative of a Karen community in Chiang Mai’s Samoeng district, said Thailand was prone to label people living in forests as encroachers.

“But we have lived in these forests for a long time,” he said.

Meanwhile, senior officials at the Natural Resources and Environment Ministry are worried that if the residents of Bang Kloi Bon and Jai Pandin are allowed to stay, enforcing laws against encroachers in other national parks would become more difficult. 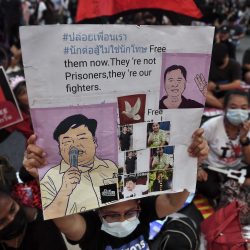 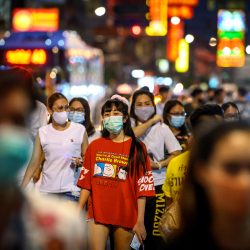 Thailand’s latest official population is 66,186,727 with more women than men