Former cabinet minister Thawee Kraikupt allegedly tried to flee the scene of a car-motorcycle crash, in Potharam district of Ratchaburi province on Saturday, in which a 16-year old boy was injured.

Rescue workers claimed that the driver of the Mercedes Benz, with Bangkok license plates, the owner of which was identified as Thawee Kraikupt, father of Palang Pracharat MP Pareena, tried to flee the scene, but car’s path was blocked by an emergency service pickup truck about 300 metres from the scene.

The accident occurred at an intersection near an irrigation canal bridge on the Potharam Hospital-Ban Kong road.

According to the police, Thawee had been driving from Potharam, while the boy, identified simply as ‘Ek’, was riding a motorcycle on the right side of the road. Upon reaching the intersection, Thawee made a right turn while the motorcyclist attempted to cross the bridge and the two vehicles collided.

The boy fell onto the road and suffered minor injuries, but Thawee failed to stop, even to help or to check the boy’s condition.

When police arrived, Thawee did not get out of the car. After more people, including the boy’s mother, showed up and started accusing him of trying to flee, however, he agreed to return to the accident scene.

Thawee later went to the Potharam police station and agreed to pay the boy’s medical bills and to pay for repairs to the motorcycle.

Ms. Pareena later admitted that her father was in the wrong, but denied that he tried to flee the scene as alleged. 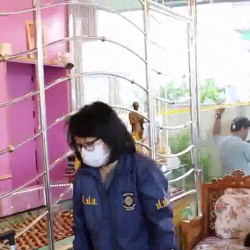