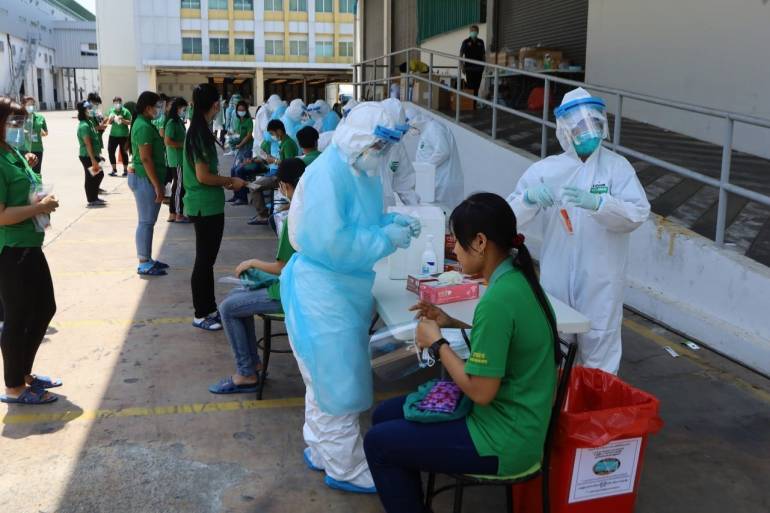 A Cal-Comp Electronics factory in Phetchaburi province has been closed from today (Friday) for 14 days by its management, after 682 of its 3,300 employees tested positive for COVID-19.

Phetchaburi provincial health chief, Dr. Petcharuek Tansawat,said yesterday that health officials are awaiting the test results for about 2,000 other employees.

In addition to the factory, the provincial communicable disease committee also decided to close off two sub-districts in Khao Yoi district, namely Sra Phang and Bang Khem, where many foreign migrant workers, who are employees of Cal-Comp, have been living in dormitories and rented houses.

Dr. Petcharuek said that the closure of the factory in Phetchaburi was a voluntary decision by the management, adding that they will take care of all their employees, including some 3,600 migrant workers, who have been quarantined in the compound of the factory in Khao Yoi district and those living in dormitories outside the factory.

He said that all the employees will be paid as normal during the 14-day quarantine period and the company’s three suppliers have been converted into kitchens, to prepare three meals a day to feed all the employees held in isolation.

One building, in the compound of the factory, has also been converted into a field hospital, he added.

Travel restrictions have also been imposed on other workers living in Bang Khem and Sra Phang, said Dr. Petcharuek, adding that they must produce their ID cards each time they enter or exit the sub-districts.

As for Thai workers in Phetchaburi, public health volunteers will visit them to offer advice on how to protect themselves from getting infected while pursuing their normal lives, he said.

Meanwhile, in Chonburi province, 127 new COVID-19 cases were recorded today, including 86 in a factory cluster and nine at a construction worker camp for migrant workers.

Cumulative infections in the province have increased to 4,001,of which 3,020 have recovered. 965 are still being treated in hospitals and death toll is 16. 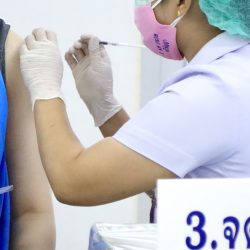