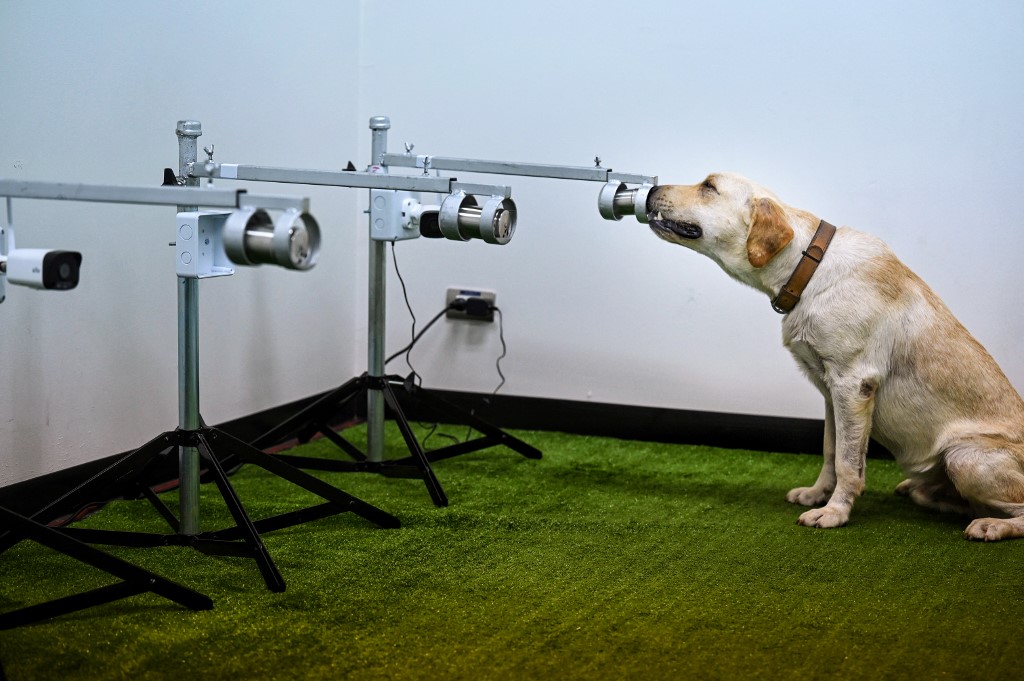 Bobby the K9 retriever dog sniffs sweat samples, in order to detect the Covid-19 coronavirus through volatile organic compounds, at the Faculty of Veterinary Science in Chulalongkorn University in Bangkok on May 21, 2021. (Photo by Lillian SUWANRUMPHA / AFP)

Dogs can be trained to detect more than 90 percent of Covid-19 infections even when patients are asymptomatic, according to research published Monday, which authors hope could help replace the need to quarantine new arrivals.

Using their remarkable sense of smell, which can pick up the equivalent of half a teaspoon of sugar in an olympic-sized swimming pool, dogs have already shown that they can sniff out maladies such as cancer, malaria and epilepsy.

Researchers from the London School of Tropical Medicine wanted to see if dogs could detect a distinctive odor given off from chemical compounds associated with someone who is Covid positive but doesn’t show symptoms.

They gathered samples of clothing and face masks from people who had tested positive for mild or symptomatic SARS-CoV-2.

Samples of the socks of 200 Covid-19 cases were collected and arranged in lab tests for six dogs that had been trained to indicate either a presence or absence of the chemical compound.

The dogs needed to be trained not to identify “false positives” in a bid to hack their reward system and obtain treats even if there were no Covid-19 samples in a given test.

“This means that the dog fully understands and gets a reward for a correct negative as well as a correct positive,” said Claire Guest, from the school’s Faculty of Infectious and Tropical Diseases.

Overall, the dogs were successfully able to identify between 94 and 82 percent of SARS-CoV-2 samples.

The researchers then modeled how effectively these success rates, combined with traditional PCR tests, could help detect mild or asymptomatic Covid-19 cases.

They found that using dogs to screen arrivals at terminuses such as airports could detect 91 percent of cases, resulting in a 2.24 times lower rate of transmission than with PCR tests alone.

March 17, 2021 Sniffer dogs, specially trained to detect people infected with COVID-19 who do not exhibit symptoms, will soon be sent to international airports and seaports to help identify asymptomatic cases among arrivals from abroad.

Authors of the research, which has yet to be peer-reviewed, said they hoped it could eventually replace the need for travelers to quarantine, which necessarily disrupts every arrival even though the vast majority are not Covid positive.

“The key thing is that dogs are significantly quicker than other tests,” said co-author James Logan.

“What we’re suggesting is that dogs would give the first initial screening, and then those (arrivals) that were indicated as positive would then receive a complimentary PCR test.”

The team said that out of a plane full of arrivals, around 300 people, less than one percent were statistically likely to be carrying SARS-CoV-2.

Under current quarantine regulations employed by some countries, all 300 would need to isolate, causing significant inconvenience.

But given the sensitivity of trained dogs, a maximum of 35 people on board would be indicated as positive, the paper said.

Of these, only around 3 would be expected to return a positive PCR test.

“This is a really important start and could lead to a useful, usable system,” said Mick Bailey, professor of Comparative Immunology at the University of Bristol, who was not involved in the research.

“But there’s a lot more validation needs to be done before we could be confident that the dogs can reliably and specifically detect asymptomatic SARS-CoV-2 infection in people in airports and train stations.” 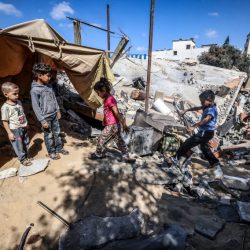 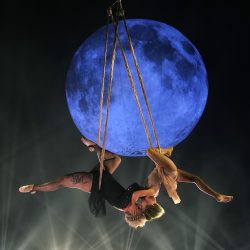