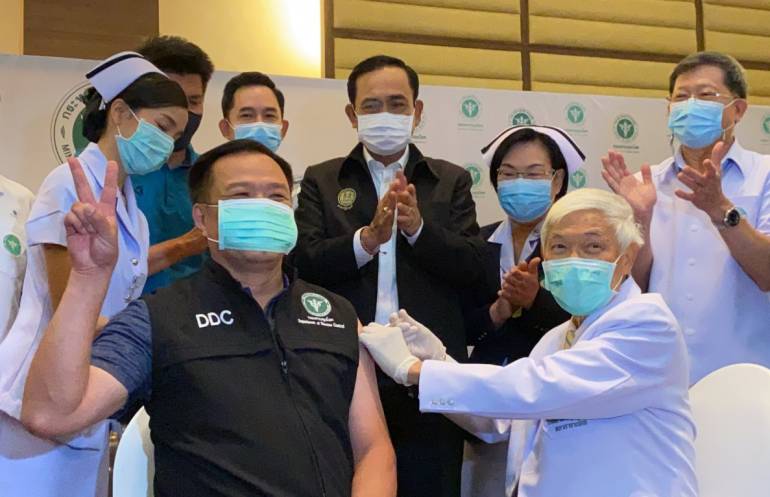 Public Health Minister Anutin Charnvirakul became the first Thai to be inoculated with the Sinovac vaccine on February 28th, at the Bamrasnaradura Infectious Disease Institute.

“There is no challenge”, responded Thailand’s Public Health Minister, Anutin Charnvirakul, when asked by Thai PBS World what he thinks is the most challenging factor in the latest wave of the COVID-19.

Anutin has come under fire many times since the pandemic began in early 2020. The public was frustrated when he was first underplaying the potential of the new virus, saying it was just like another type of flu. There is now, however, an online campaign asking him to quit, because of the slow vaccine rollout, among other things.

Anutin is currently under pressure to answer the public’s questions about the vaccine programs, whether Thailand has enough supplies, could be any faster, whether there will be other vaccine brands entering Thailand, whether private medical institutes can import the vaccines or even whether laboratories in Thailand have reached their maximum capacity for processing test kits.

“The ministry of public health always tells the truth, in terms of facts and figures. The ministry has never reported a false number of infected people. Our aim is still to control the situation within the next few weeks, and in accordance with the arrival of vaccines. We hope that things can only get better.”

Vaccination is the hot topic at the moment. Thailand will have a plentiful supply of vaccines by the end of the year but, as of now, less than 5% of the population have received their jabs. Most people Thai PBS World spoke to on the street feel that the Thai government is being very slow in getting the population inoculated.

Anutin pointed out that people who get infected or are related to them will, of course, say the rollout is too slow.

“If we look at the agreements we have entered into to purchase the vaccines from our suppliers, they were completed in good time. According to the contract with AstraZeneca, who are setting up manufacturing facilities in Thailand, they will begin the supply of product from June 1st.

He said Thailand signed the contract in October last year, during a time when the country had no locally transmitted infections. “That means we were not careless,” he said.

Anutin added that the government persuaded the vaccine maker to establish a production line in Thailand because the country could be certain that the vaccine would be at “arm’s reach.” Having the production facility based in our own country guarantees that we will never be short of the vaccines.

Everyone will get the jabs

Several months ago, Prime Minister Prayut Chan-o-cha said, during a televised address, that everyone in Thailand will be covered, when it comes to the vaccines.

The government has been trying to assure the public that Thailand has arranged sufficient supplies for everyone, “all people living in this country,” Anutin said.

“Everyone on Thai soil,” he reiterated, with or without Thai citizenship, will be inoculated.

Without giving a specific timeframe, he said, to achieve herd immunity, Thailand needs to inoculate 50 million people. Pregnant women, those under 18 and people with certain comorbidities cannot be inoculated. So, the plan is to include everyone else.

Anutin said the ministry has to establish channels for foreigners in Thailand to get vaccinated, everyone “belongs to some organization or association.” He wasn’t specific but seems to realize that more has to be done for this section of the population.

In addition to online appointments, the ministry is planning to set up walk-in facilities. Anutin said that, with the amount of vaccines increasing, that process will “be introduced over 6 to 8 months, the accessibility to vaccines must not be difficult.”

The question of efficacy

Then comes the question of the efficacy of vaccines that Thailand currently makes available for use in the inoculation campaign. Anutin was the first person in the country inoculated. He was given CoronaVac (the vaccine made by China’s Sinovac) in late February. The Prime Minister, because of his age, was the first person vaccinated with the UK’’s AstraZeneca vaccine in mid-March.

Before Thai PBS World could even finish asking the question, Anutin said that he can’t ensure the efficacy, but a pool of doctors and professors of medicine have publicly guaranteed that Thailand will only administer proper and efficacious vaccines.

“Every vaccine has positives and negatives but, all in all, every vaccine is working well. I haven’t seen a single brand of vaccine that has not attracted at least some negative news. This kind of thing can happen. All vaccines in the world, as of this moment, are still being used under emergency use authorizations.”

He added that no vaccine manufacturer is currently able to certify the efficacy of its vaccine, because the period since the development of COVID-19 vaccine, when compared with established vaccines, is very short.

He said, however, that in the next few months, Thailand will have more choices of vaccines, since at least two more manufacturers have submitted documents and applications for registration.

At 1.2% Thailand ranks sixth in ASEAN for population inoculation

Thailand ranks sixth among ASEAN’s 10 member countries for COVID-19 vaccination of their population, at 1.2%, with over 1.6 million doses being administered, according to the Ministry of Higher Education, Science, Research and Innovation. More than 1.16 million vaccinations were the first dose, while the second jab account for over 434,000 doses to date.

Teamwork or being isolated?

Many have noticed that Anutin has been somewhat isolated since the prime minister appointed a new committee to oversee the vaccine management without him on board, and the cabinet endorsed the PM having the sole power to make related decisions and issue appropriate orders.

He also said that the prime minister is his boss and he always obeys the rules, doing whatever the PM orders him to do.

“I will always help him to get the country through this period. In this kind of situation, no one can fail. Either we rise together or we fall together, and failure for us is not an option.”

“I don’t think this situation will bring us to our knees. We will continue to work together, in the same direction, toward the target of sweeping this virus away for the benefit of everyone who lives in this country.” 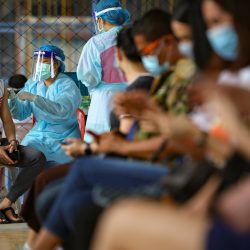 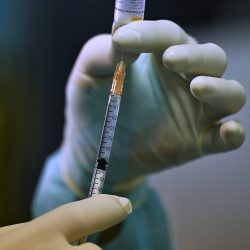 Over 60s in Thailand to have option of Sinovac vaccine, not just AstraZeneca