The Prayut government today announced a series of measures aimed at containing the spread of the deadly coronavirus that will include a ban on mass gatherings and the postponement of the traditional Songkran holiday.

It also insisted that Thailand has not yet reached “stage 3” of the pandemic and the government is doing everything it can to contain the virus.

Speaking after a five-hour meeting of the Covid-19 prevention center chaired by Prime Minister Prayut Chan-o-cha, Deputy Prime Minister Wissanu Krea-ngarm said all universities and schools will be required to suspend classes while such sports venues as boxing stadiums as well as movie theatres will also be temporarily closed.

The proposed measures will be tabled to the Cabinet at its weekly meeting on Tuesday for approval, he said

Wissanu said all government agencies will also start adopting staggered work schedule to minimize chances of the virus transmission.   They will also be encouraged to work on-line from home.

He said the original extended holiday for Songkran approved by the Cabinet on April 13-15 will be postponed to avoid a mass movement of revelers that could increase the chances of virus transmission.  A new alternative holiday will be considered later, he said.

Wissanu explained that venues where there are mass gatherings and activities with close contact will be temporarily closed. He said these places include universities, schools, cramming schools, and movie theaters.

However, he said the restriction will not be applied to restaurants or foodshops.  “But they need to adopt required health safety measures. They need to check their customers’ temperature,  and provide them with hand gel and masks,” he said.

He did not say whether entertainment places will be subject to the restrictions.

The deputy prime minister also gave an assurance that all government agencies concerned are working to cope with a worst-case scenario.  All hospitals and clinics, both public and private at all levels throughout the country, are being mobilized to handle the pandemic.

“All doctors, nurses, and medical staffs, including those who have retired, are also being mobilized to cope with the situation,” he said.

He denied that the pandemic in Thailand has reached “stage 3”.  He said there are still no mass infections and confirmed infection cases are still confined to certain areas.

Wissanu also said the government will go ahead with its decision to suspend visa on arrival status and free visa travel for foreigners to stem the spread of the virus from foreign visitors.  “We have discussed with the governments of the countries accorded with the status and they have no objection,” he said.

He said the government is also working on a series of financial measures to help ease the hardships being faced by businesses as a result of the pandemic.

“One thing that the government want to convey to the public is that fighting Covid-19 is now its top priority.  Dealing with its economic and other impacts is secondary,” he said. 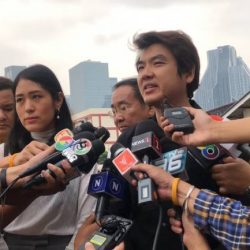 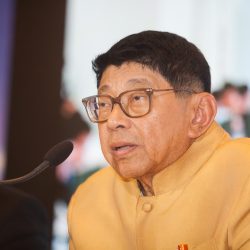