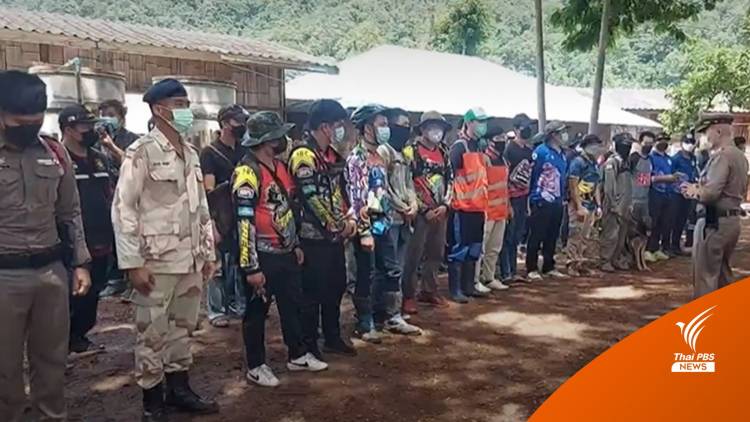 A couple is being been held in police custody for questioning in connection with the search for a 23-month-old girl, who went missing from a remote village in Mae Taeng district of Thailand’s northern province of Chiang Mai on Sunday night.

The 44-year-old Akha man is a neighbour of the missing girl’s father. He and his wife were separately questioned by police for several hours yesterday, after which both were detained on charges of illegal entry.

A blanket search for the child known as “Gina”, involving several local police, border patrol police, volunteers and villagers of Huay Fak Dab in Intakin sub-district, resumed today after massive search yesterday, which was called off at night.

The village head said today divers from a search and rescue unit took part in the search of a pond near the village yesterday, but didn’t find any trace of the child.

He suspects that the toddler might have been kidnapped by someone who knew her and her family, noting that the child normally would not allow strangers to hug her.

Police, also suspecting that the child may have been lost in the woods, have been examining CCTV footage from along the road linking Mae Taeng with Chiang Dao districts, to identify cars travelling on the road from 10am to 7pm on Sunday.

Meanwhile, the Mirror Foundation, which is dedicated to the search for missing children in Thailand, said in a Facebook post today that the girl’s family settled in Ban Huay Fak Dab village not long ago and some residents in the village of about 100 households might not know them.

The child went missing sometime between 6pm and 7pm on Sunday evening, when her mother was preparing food in the kitchen while her father was out disposing of garbage.

The foundation said the remote village is surrounded by mountains and forests and is far from the district’s township, but some vendors’ cars occasionally arrive at the village.

It also said that, about four years ago, a two-year-old child went missing from home in Chiang Mai and the victim has not been found since.