A senior Thai police officer said today that he suspected that the recent CNN report about the export of tens of millions of used medical gloves to the United States, from a firm in Thailand, may be linked to the kidnap of a Taiwanese businessman in Bangkok in March this year.

Pol Lt-Gen Chiraphop Phuridet, commissioner of Central Investigation Bureau, told the media today (Wednesday) that police believe that one of the Americans, allegedly involved in the abduction following a failed glove deal, might have tipped off a CNN reporter about sub-standard gloves being exported to the US.

American Louis William Ziskin, CEO of a Los Angeles-based tech company, reportedly bought 2.7 million US dollars’ worth of nitrile medical gloves from the “Paddy the Room” trading company in Thailand, managed by Taiwanese businessman Wen Yu Chung, for export to the US last year, but the gloves turned out to be used and repackaged or substandard gloves.

According to Thai police, Ziskin allegedly then hired an Israeli man, who opened a detective firm in Thailand, to recover his money from Wen. The gang later contacted Wen under the pretext of buying rubber gloves from the “Paddy the Room” company. An appointment was made to meet at a restaurant in Bangkok’s Sukhumvit area in March this year, when the Taiwanese businessman was kidnapped.

Three million US dollars in ransom was allegedly demanded from Wen’s boss and family in exchange for his safe release, but his boss reportedly informed the Thai police. Wen was later released and Ziskin, and another American Jeremy Hughes Manchester and a Thai, were subsequently arrested by Thai police in May.

Eight other suspects in the kidnap case were also arrested.

Pol Lt-Gen Chirapob said that the kidnapping and the fraudulent medical glove deal are two separate cases, adding that police have advised the cheated American businessman, believed to be Ziskin, to lodge a complaint with the police.

He said that no complaint has been filed to date adding, however, that Ziskin could do so if he returns to Thailand.

According to US court documents, Ziskin was arrested in 2000 and convicted of being part of a drug ring that smuggled ecstasy to southern California. 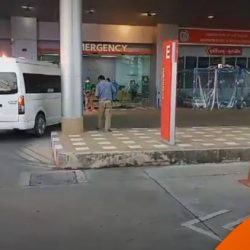 Nine arrested in Thailand for selling Favipiravir online without permission