COVID-19 infections in the eastern coastal province of Chon Buri continue to surge, with 1,342 new cases being recorded in the past 24 hours, including clusters among students at two universities, and with more than half of the cases reported from Banglamung district which covers the beach town of Pattaya.

No fatalities from COVID-19 infection have been reported in the same period. The figure in Chon Buri is slightly lower than during the peak of COVID-19 spread in August last year at just above 1,600 cases a day.

According to the Chon Buri provincial health office today (Friday), most of the new cases are in the Muang, Si Racha and Bang Lamung districts, where cases are spiking as health officials accelerate antigen testing. Among those in Muang are 40 employees in neighbouring Rayong province receiving treatment in Chon Buri.

Most of the cases were linked to restaurants and pubs in Pattaya, Bang Lamung and on Bang Saen and Won Napa beaches.

Health officials attributed the clusters among students at the Burapha and Kasetsart universities to New Year parties and celebrations.

The spike in infections and active screening have caused a shortage of antigen test kits in the province.

About 1.8 million people in Chon Buri have already received two doses of vaccine, with 108,522 having received just one. There are still more than 412,918 people who are unvaccinated.

One of the new patients today needs a ventilator to help in breathing, even though he has received two vaccine shots. There is another patient who is suffering from lung infection, despite being fully vaccinated. 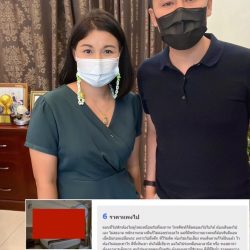 Worsening air pollution forecast until Monday in and around Bangkok