Xi’s comments come more than a week after Russia launched an invasion of Ukraine, with the UN saying the number of people fleeing the war has crossed two million — making it the fastest-growing refugee crisis since World War II.

Beijing has refused to condemn the invasion by its close partner Russia, and Xi said he wanted “the two sides to maintain the momentum of negotiations, overcome difficulties and continue the talks to achieve results”, according to state broadcaster CCTV.

“We would like to  call for maximum restraint to prevent a large-scale humanitarian crisis,” he said.

Xi added that “the current situation in Ukraine is deeply worrying” and China is “grieved that there is renewed war on the European continent”.

China has also said it will send humanitarian aid to Ukraine.

On Monday, Foreign Minister Wang Yi told reporters that Beijing was open to helping mediate peace — but stressed that the friendship between Beijing and Moscow was still “rock solid” despite international condemnation of Russia’s ongoing invasion. 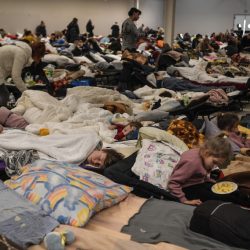