Former Kaeng Krachan national park chief Chaiwat Limlikhit-akson said today (Monday) that he will report to the Department of Special Investigation (DSI) tomorrow to acknowledge the charges filed against him in connection with the disappearance and murder of Karen community rights activist Porlajee “Billy” Rakchongcharoen five years ago.

Chaiwat, currently director of Conservation Office 9 in Ubon Ratchathani, two former subordinates, Boontaen Busarakham and Thanaset Chaemthet, and an outsider, Krissanapong Chitthet, have been charged by the DSI with premediated murder, coercion, illegal detention, robbery and tampering with evidence to cover up the crime.

In an interview with Thai PBS, Chaiwat claimed that a police officer in the southern province of Nakhon Si Thammarat had intimidated the wife of Mr. Boontaen in an effort to implicate him as the mastermind behind Billy’s disappearance and murder.

The police officer also offered a witness protection program to Boontaen and the other two suspects if any of them came forward to confess and implicate Chaiwat, according to the former park chief, adding that the officer told Boontaen’s wife that her husband might be “silenced” by Chaiwat.

The former park chief said the officer’s actions had raised the suspicions of his three men.

He said that he didn’t know whether the police officer was working for the DSI or not but, if he is, he suggested the DSI order the officer out of Nakhon Si Thammarat province where Boontaen is assigned to work. 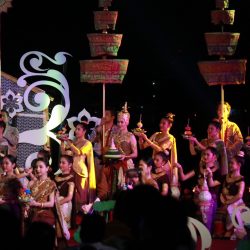