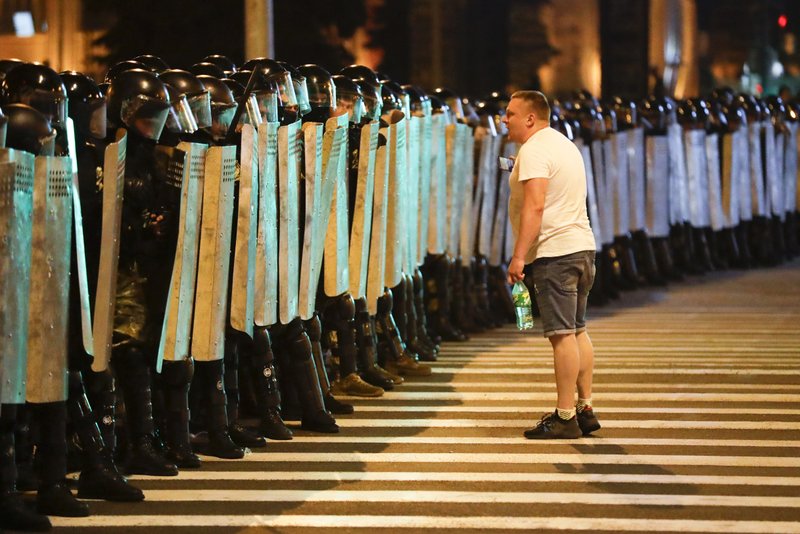 MINSK, Belarus (AP) — Election officials in Belarus said Monday that the country’s longtime authoritarian leader Alexander Lukashenko has won his sixth consecutive presidential term, taking over 80% of the votes. Human rights groups said one person was killed and dozens were injured in a police crackdown on protests that followed Sunday’s vote.

The country’s central election commission announced on Monday that all the ballots have been counted and Lukashenko took 80.23% of the votes, while his main opposition challenger Sviatlana Tsikhanouskaya had only 9.9%.

The announcement may exacerbate tensions with opposition supporters, who believe the results of the vote were rigged and plan to gather in Minsk for more protests on Monday evening.

Thousands of people took to the streets in a number of Belarusian cities and towns on Sunday night, protesting the early count suggesting Lukashenko’s landslide victory.

Tsikhanouskaya, a former English teacher and political novice, rejected the official figures, saying “I will believe my own eyes — the majority was for us.”

Her supporters quickly took to the streets of the capital to protest what they saw as official manipulation of the vote. They faced rows of riot police in black uniforms who moved quickly to disperse the demonstrators, firing flash-bang grenades and beating them with truncheons.

The brutal crackdown followed a tense campaign that saw massive rallies against Lukashenko, who has ruled the ex-Soviet nation with an iron fist for 26 years. Lukashenko has not yet commented on the election results or the protests.

Several other cities across the country saw similar crackdowns on protesters. According to the Viasna human rights group, more than 200 protesters were detained, dozens sustained injuries and one died as the result of the clashes with police.

“What has happened is awful,” Tsikhanouskaya told reporters Sunday.

An AP journalist was beaten by police and treated at a hospital.

At Minsk’s Hospital No. 10, an AP reporter saw a dozen ambulances delivering protesters with fragmentation wounds and cuts from stun grenades and other injuries.

“It was a peaceful protest, we weren’t using force,” said 23-year-old protester Pavel Konoplyanik, who was accompanying his friend who had a plastic grenade fragment stuck in his neck. “No one will believe in the official results of the vote, they have stolen our victory.”

Konoplyanik, whose legs were also cut by fragments of police grenades, said he doesn’t want to leave the country but fears that he might have no other choice.

Two prominent opposition challengers were denied places on the ballot, but Tsikhanouskaya, the wife of a jailed opposition blogger, managed to unite opposition groups and draw tens of thousands to her campaign rallies, tapping growing anger over a stagnant economy and fatigue with Lukashenko’s autocratic rule.

Lukashenko was defiant as he voted earlier in the day, warning that the opposition will meet a tough response.

“If you provoke, you will get the same answer,” he said. “Do you want to try to overthrow the government, break something, wound, offend, and expect me or someone to kneel in front of you and kiss them and the sand onto which you wandered? This will not happen.”

Three journalists from the independent Russian TV station Dozhd were detained after interviewing an opposition figure and were deported.

The Organization for Security and Cooperation in Europe, whose assessments of elections are widely regarded as authoritative, was not invited to send observers.

Tsikhanouskaya had crisscrossed the country, tapping into public frustration with a worsening economy and Lukashenko’s swaggering response to the pandemic.

Belarus, a country of 9.5 million people, has reported more than 68,500 coronavirus cases and 580 deaths but critics have accused authorities of manipulating the figures to downplay the death toll.

Lukashenko has dismissed the virus as “psychosis” and declined to apply measures to stop its spread, saying a lockdown would have doomed the already weak economy. He announced last month that he had been infected but had no symptoms and recovered quickly, allegedly thanks to playing sports.

Yet for some voters, Lukashenko’s long, hard line rule was a plus.

“He is an experienced politician, not a housewife who appeared out of nowhere and muddied the waters,” retiree Igor Rozhov said Sunday. “We need a strong hand that will not allow riots.” 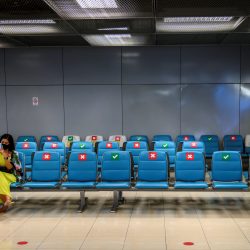