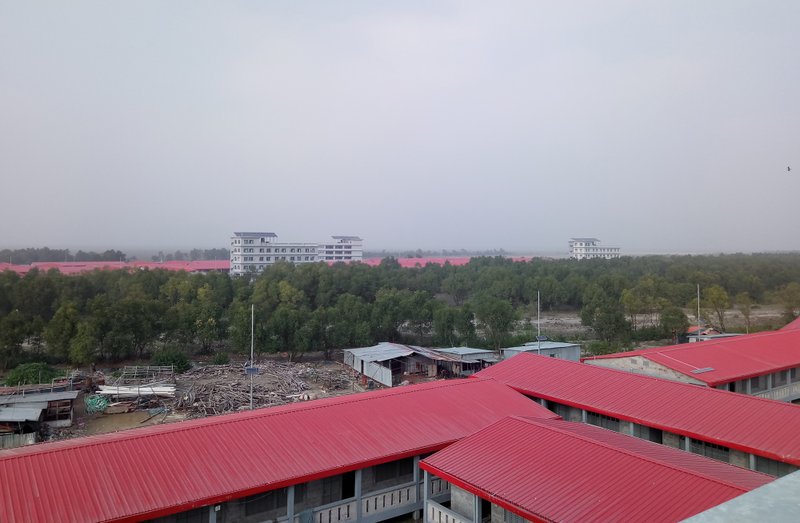 In this Thursday, Dec. 19, 2019 photo, newly constructed buildings stand on Bhasan Char, or floating island, in the Bay of Bengal, Bangladesh. The island in Bangladesh that was regularly submerged during monsoon seasons is ready to house 100,000 Rohingya refugees, but no date has been announced to begin relocating people from crowded and squalid camps on the country’s border with Myanmar, officials said Thursday. The island is built to accommodate 100,000 people, just a fraction of the million Rohingya Muslims who have fled waves of violent persecution in their native Myanmar. (AP Photo/Saleh Noman) “Bhasan Char is ready for habitation. Everything has been put in place,” Bangladesh refugee, relief and repatriation commissioner Mahbub Alam Talukder told The Associated Press.

DHAKA, Bangladesh (AP) — A Bangladeshi island regularly submerged by monsoon rains is ready to house 100,000 Rohingya refugees, but no date has been announced to relocate people from the crowded and squalid camps where they’ve lived for years, officials said Thursday.

Flood protection embankments, houses, hospitals and mosques have been built on Bhasan Char, or floating island, in the Bay of Bengal, officials said.

“Bhasan Char is ready for habitation. Everything has been put in place,” Bangladesh refugee, relief and repatriation commissioner Mahbub Alam Talukder told The Associated Press.

The island is built to accommodate 100,000 people, just a fraction of the million Rohingya Muslims who have fled waves of violent persecution in their native Myanmar.

About 700,000 people came after August 2017, when the military in Buddhist-majority Myanmar began a harsh crackdown against Rohingya in response to an attack by insurgents. Global rights groups and the U.N. called the campaign ethnic cleansing involving rapes, killings and torching of thousands of homes.

Foreign media have not been permitted to visit the island.

“I saw a market with about 10 grocery shops and roadside tea stalls. Some were selling fish and vegetables,” he said. “All is set there with a solar power system and water supply lines.”

Bangladesh is a low-lying delta nation. The island, 21 miles (34 kilometers) from the mainland, surfaced only 20 years ago and was never inhabited.

The Bangladesh navy has been implementing a multimillion-dollar plan to bolster the swampy island, which is submerged for months during annual monsoon season.

International aid agencies and the United Nations have vehemently opposed the relocation plan since it was first proposed in 2015, expressing fear that a big storm could overwhelm the island and endanger thousands of lives.

Mostofa Mohamamd Sazzad Hossain, a spokesman for the U.N. High Commissioner for Refugees in Bangladesh, said Thursday the agency isn’t ready to endorse the relocation and is waiting for a chance to visit the island after a November trip was canceled.

“The U.N. has emphasized the importance of undertaking independent and thorough technical and protection assessments that consider safety, sustainability, and protection issues prior to any relocation taking into place. The assessment process should include onsite visits to Bhasan Char,” Hossain said.

The current refugee camps near the beach town of Cox’s Bazar are overcrowded and unhygienic. Disease and organized crime are rampant. Education is limited and refugees aren’t allowed to work.

Still, most Rohingya are unwilling to return to Myanmar due to safety concerns. Government officials didn’t have an estimate of how many refugees would be willing to be relocated to the island.

On Thursday, two Bangladeshi contractors involved with development of the island described construction there. They spoke to the AP on condition of anonymity because they were not authorized to talk to the media.

“We have built quality infrastructure. Bangladeshi villages have never seen such good work. This is like a modern township project,” one contractor said.

“We have built multifamily concrete homes, hospitals, mosques, schools, playgrounds and roads. There are solar-power facilities, a water supply system. We constructed raised concrete buildings that could be used as cyclone shelters. Many trees have been planted,” he said.

Prime Minister Sheikh Hasina has repeatedly told the U.N. and other international partners that her administration will consult them before making a final decision on the relocation, and that no refugees will be forced to move.

Bangladesh attempted to start sending refugees back to Myanmar under a bilateral framework last November, but no one was willing to go.

The Rohingya are not recognized as citizens in Myanmar, rendering them stateless, and face other forms of state-sanctioned discrimination.

A U.N.-sponsored investigation in 2018 recommended the prosecution of Myanmar’s top military commanders on charges of genocide, war crimes and crimes against humanity for the violence perpetrated against the Rohingya.

Myanmar is defending itself in the International Court of Justice in the Hague, Netherlands, after the West African nation of Gambia brought a case backed by the Organization for Islamic Cooperation, Canada and the Netherlands.

Gambia in its submission said there was a “serious and imminent risk of genocide recurring” and called for emergency measures to prevent Myanmar from committing any further atrocities or erasing any evidence. The court is expected to deliver a decision on Jan. 23 on what measures should be imposed.

Kamal Hossain, Bangladesh’s top government official in Cox’s Bazar, said Thursday that discussions attempting to convince refugee families to move to the island are continuing. “We are ready. This is a continuous process,” he said. 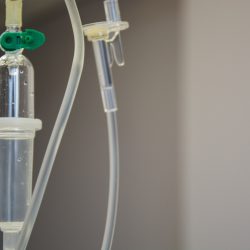 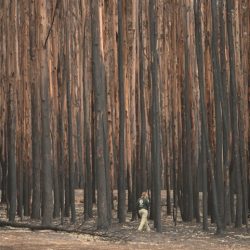