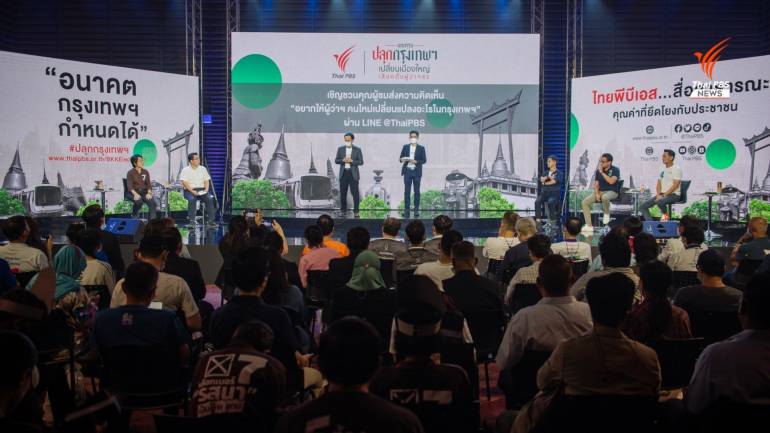 As voting in the first Bangkok gubernatorial election in nine years will take place on May 22nd, Thai PBS hosted a debate on Monday in which five key candidates took part and shared their visions for the future of Thailand’s capital and answered questions from the public.

The debate began with the question “How do you think Bangkok will look four years from today?” The first candidate to answer was former senator Rosana Tositrakul. She said that Bangkok in 2026 should be free of corruption and resources will be allocated equally to all of its citizens.

Other candidates, such as Move Forward Party’s Wiroj Lakkhanaadisorn, said that Bangkok should be free of unfair regulations, while former deputy Bangkok governor Sakoltee Phattiyakul said that the city should be more financially independent. The Democrat Party’s Suchatvee Suwansawat said that Bangkok will become more competitive, compared to other cities around the world, while Thai Sang Thai Party’s Sita Diwari said that the capital will become a more inclusive and diverse city.

In the second round of the debate, six questions were asked. Each candidate had to pick three of them to answer. The first question was “How would you improve accessibility in Bangkok?”

Candidates Wiroj, Sita, Sakoltee and Suchatvee all promised to create better infrastructure and facilities, to ensure better access for people with special needs.

The second question in round two was “How would you go about reforming the public health system, even if that could not be completed during your term?”

According to Rosana, individuals and groups should be strengthened, to enable them to take charge of their own health. The existing health centres should be upgraded to provide a 24/7 service. Each district should have at least one hospital.

Sakoltee said that the issue mainly lies in financing. More money should be allocated and more centres and hubs created, as well as the hiring of more personnel in each district. Technology should also be deployed. For example, telemedicine should be introduced to ensure access.

Suchatvee said more personnel should be recruited for public health centres, to meet the demand. Specialists should be available in hospitals across the capital, not only in medical schools.

For the third question in round two, the candidates were asked “How will you provide housing for those in urban poverty?”

The fourth question was “How will you improve Bangkok people’s digital skills?” Suchatvee responded with a policy to provide free internet for all Bangkok’s citizens. Technology will be deployed, such as Wi-Fi CCTV, to improve the wellbeing of the people.

The fifth question was “What is the indicator of successful public participation?” Rosana responded with a policy to allocate money to each district, for the people to work on projects of their own, and enabling citizens to rate the performance of the officials in each district

Sita said community councils and an online system must be created for holding referenda, which will be taken into consideration in the decision making process.

The last question for round two was “How satisfied are you with the BMA’s power structure?”

Wiroj said that relevant laws and regulations must be revised to empower the Bangkok Metropolitan Council and an anti-corruption committee should be created to watch over the BMA and the council.

Sakoltee wants to revise regulations to ensure that the budget is allocated directly to fix any issue in Bangkok.

The debate ended with questions from the audience. One of them being “What will be the hardest problem for you to solve if you are elected Governor?”

Suchatvee said the rising sea level is an under-addressed issue. Sakoltee said people are an issue, because no regulation matters without cooperation from the people when improving the city.

According to Sita, the bureaucratic and patronage-client systems are the hardest problems to solve.

Rosana says corruption and existing commitments, such as those with the BTS and the waste disposal agencies, are problems which need to be fixed.

Biden's visit to racist massacre site will highlight US extremism