Former Bangkok governor Aswin Kwanmuang has proposed that garbage collection in Bangkok be increased from twice to three or four times a day.

On the campaign trail in Bangkok Noi and Khlong San districts, on the Thon Buri side of the capital, Aswin said yesterday that garbage collection normally happens twice a day, starting at about 4am and 6pm, to avoid causing more traffic congestion. He noted, however, that the 6pm round may be too early as many households have not yet placed their garbage at the designated roadside collection points and a lot of it is left uncollected until garbage trucks return again the following day.

His idea, he said, is to have collections during the afternoon,when traffic is less congested, and/or around midnight, in addition to the current 4pm and 6pm.

The former governor noted that most of the garbage disposed of by households is wet and perishable.

Aswin held a campaign rally in Bueng Kum district last night, during which he announced his intention to carry on with the unfinished project to solve flooding.

He pointed out that there are 26 flood prone areas in the district and 15 of them have already been addressed, leaving nine others yet to be implemented.

Aswin is running as an independent candidate in the May 22ndBangkok gubernatorial election. 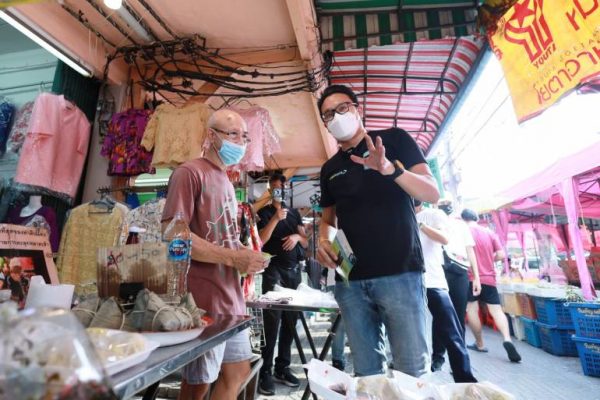 Another independent candidate, former Bangkok deputy governor Sakoltee Phattiyakul, is floating the idea of providing more space for small vendors to sell their products to consumers.

During his campaigning at a wet market in Khlong San district yesterday, Sakoltee said that, even though the Bangkok Metropolitan Administration has no authority to control the prices of consumer products, which is the responsibility of the Commerce Ministry, it can help by finding more space where vendors can sell their products at cheaper prices. Another independent candidate, former transport minister Chadchart Sittipunt said, while campaigning in Phra Khanong, that there is no public park in the district, but there are several unused green land plots which have the potential to be turned into a public park.

Since this land is privately owned, he said the city administration should approach the landlords and offer them incentives for allowing the unused land to be developed into parks.

He also said that the compounds of several temples in the district could also be turned into spaces for recreation or exercise for people in their communities. Gun, not God, will save America