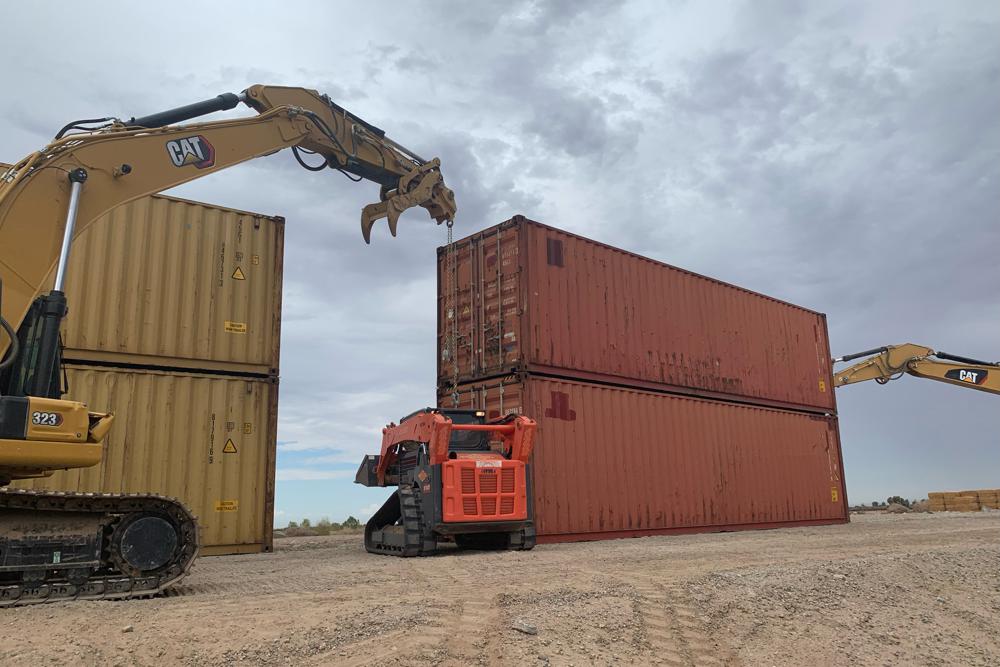 This photo provided by the Arizona Governor’s Office shows shipping containers that will be used to fill a 1,000 foot gap in the border wall with Mexico near Yuma, Ariz., on Friday, Aug. 12, 2022. Two will be stacked atop each other and then topped with razor wire to slow migrants from crossing into Arizona. Republican Gov. Doug Ducey acted without federal permission and plans to fill three gaps totaling 3,000 feet in the coming weeks. (Arizona Governor’s Office via AP)

PHOENIX (AP) — Arizona began moving in shipping containers to close a 1,000-foot gap in the border wall near the southern Arizona farming community of Yuma on Friday, with officials saying they were acting to stop migrants after repeated, unfulfilled promises from the Biden administration to block off the area.

The move by Arizona comes without explicit permission on federal land, with state contractors starting to move in 60-foot-long (18.3-meter-long) shipping containers and stacking two of the 9-foot-tall (2.7-meter-tall) containers on top of each other early Friday. They plan to complete the job within days, and the containers will be topped with 4 feet (1.2 meters) of razor wire, said Katie Ratlief, Republican Gov. Doug Ducey’s deputy chief of staff.

“The federal government has committed to doing this, but we cannot wait for their action,” Ratlief said.

John Mennell, a spokesman for U.S. Customs and Border Protection, said the agency had just learned of Arizona’s action and “is not prepared to comment at this time.”

The move is the latest pushback by a Republican-led border state to what they contend is inaction by Democratic President Joe Biden on immigration. It was immediately prompted by the announcement of the end of the “Remain in Mexico” program that was announced this week, Ducey’s top lawyer, Annie Foster said. That program required asylum-seekers to return to Mexico and await a court date, although thousands of migrants who make it into the country were not returned.

Arizona has been sending two to three buses of asylum seekers from Yuma to Washington over the last three months to make a political statement as the number of arriving migrants overwhelmed local resources. Ducey began the program in May and has said everyone on the bus trips are going voluntarily to the capital with intended final destinations in East Coast cities.

Texas also is busing migrants to the East, and the mayors of New York and Washington sought federal help last month to deal with the influx, a request that brought a gleeful response from Republicans who say the pleas are evidence the U.S. is in an immigration crisis.

As of Aug. 11, the state of Arizona had sent 1,425 asylum seekers to Washington, according to the governor’s office.

Ducey is using $6 million for the project out of $335 million the Legislature authorized in June to construct virtual or physical fencing along the border with Mexico.

Ducey, who co-chairs the Republican Governors Association, and other GOP politicians have tapped into border security as a potent political foil in an election year. He packed a signing letter for the budget with criticism of Biden.

“Arizona will not sit idly by as the Biden administration fails to do its job and safeguard our state and nation from the clear and present danger of an unsecure border,” Ducey’s letter said.

The Biden Administration announced late last month that it had authorized completion of the Trump-funded U.S.-Mexico border wall near Yuma. The area has become one of the busiest corridors for illegal crossings, and they planned to fill in four wide gaps. Arizona officials said they did not know why there was a discrepancy between the three gaps they identified and the federal government’s plans.

Biden had pledged during his campaign to cease all future wall construction, but the administration later agreed to some barriers, citing safety. The Department of Homeland Security planned work to close four wide gaps in the wall near Yuma to better protect migrants who can slip down a slope or drown walking through a low section of the Colorado River.

Homeland Security Secretary Alejandro Mayorkas authorized completion of the project near the Morelos Dam in July, a move officials said reflected the administration’s “priority to deploy modern, effective border measures and also improving safety and security along the Southwest Border.”

Arizona points to a rising number of migrants coming into the state and accompanying drug smuggling as a major reason for their action. Agents stopped migrants more than 160,000 times from January through June in the Yuma sector, nearly quadruple from the same period last year. The only other Border Patrol sectors with more traffic were Del Rio and Rio Grande Valley in South Texas.

Despite the federal promise to fill in the gaps, Arizona officials said no action had been taken to actually close the gaps. The federal government apparently put the project out to bid this week, but that may takes weeks or months.

Foster said he decided to act even if the federal government later objects.

“At this point, we are closing that gap and we’ll figure out the consequences as we move forward,” Foster said at a briefing for reporters. “But bottom line is that the federal government has a duty to protect the states — that’s part of the contract, that’s part of the constitution. They failed to do that.” 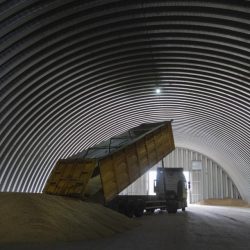 Ship heads to Ukraine to get grain for food-starved Africa 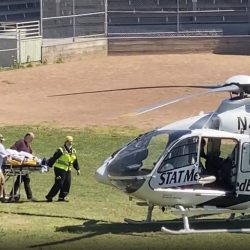