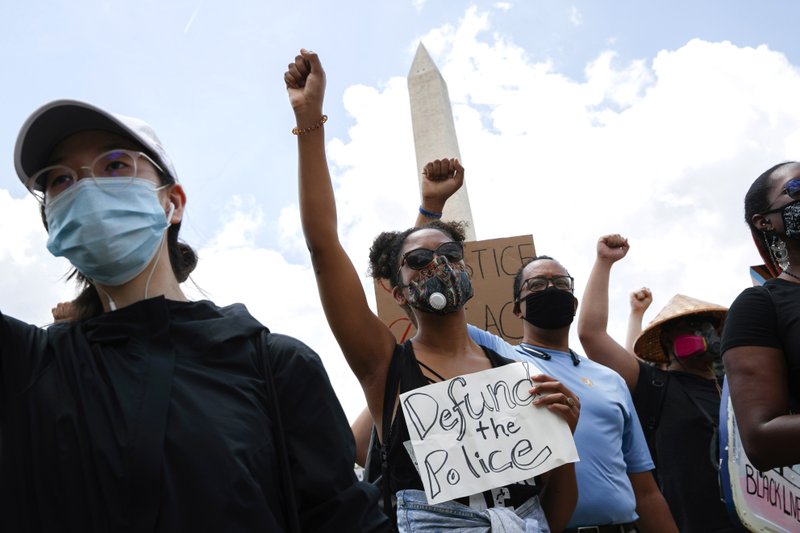 Dalyce Wilson, center, of Silver Spring, Md., joins a march by the Washington Monument as people demonstrate in Washington on Friday, June 19, 2020, to mark Juneteenth, the holiday celebrating the day in 1865 that enslaved Black people in Galveston, Texas, learned they had been freed from bondage, more than two years after the Emancipation Proclamation. (AP Photo/Jacquelyn Martin)

DETROIT (AP) — Protesters marched over the Brooklyn Bridge, chanted “We want justice now!” near St. Louis’ Gateway Arch, prayed in Atlanta and paused for a moment of silence at the Martin Luther King Jr. Memorial in Washington, as Americans marked Juneteenth Friday with new urgency amid protests to demand racial justice.

The holiday, which commemorates the emancipation of enslaved African Americans, is usually celebrated with parades and festivals but became a day of protest this year in the wake of nationwide demonstrations set off by George Floyd’s killing at the hands of police in Minneapolis.

In addition to the traditional cookouts and readings of the Emancipation Proclamation — the Civil War-era order that declared all slaves free in Confederate territory — Americans of all backgrounds were marching, holding sit-ins or car caravan protests.

Thousands of people gathered at a religious rally in Atlanta. Hundreds marched from St. Louis’ Old Courthouse, where the Dred Scott case partially played out, a pivotal one that that denied citizenship to African Americans but ended up galvanizing the anti-slavery movement. Protesters and revelers held signs and pushed baby strollers in Dallas, danced to a marching band in Chicago, and, in Detroit, registered people to vote and encouraged them to participate in the Census.

“Now we have the attention of the world, and we are not going to let this slide,” said Charity Dean, director of Detroit’s office of Civil Rights, Inclusion and Opportunity, who spoke during an event that called for an end to police brutality and racial equality, and which drew hundreds of people.

Events marking Juneteenth were planned in every major American city on Friday, although some were being held virtually due to the coronavirus pandemic. At some events, like in Chicago and New York, participants packed together, though many wore masks; at others, masks were scarce.

In Nashville, Tennessee, about two dozen Black men, most wearing suits, quietly stood arm in arm Friday morning in front of the city’s criminal courts. Behind them was a statue of Justice Adolpho Birch, the first African American to serve as chief justice of the Tennessee Supreme Court.

“If you were uncomfortable standing out here in a suit, imagine how you would feel with a knee to your neck,” said Phillip McGee, one of the demonstrators, referring to Floyd, a Black man who died after a white police officer pressed a knee into his neck for several minutes.

Former President Abraham Lincoln first issued the Emancipation Proclamation on Sept. 22, 1862, and it became effective the following Jan. 1. But it wasn’t enforced in many places until after the Civil War ended in April 1865. Word didn’t reach the last enslaved Black people until June 19 of that year, when Union soldiers brought the news of freedom to Galveston, Texas.

Most states and the District of Columbia now recognize Juneteenth, which is a blend of the words June and 19th, as a state holiday or day of recognition, like Flag Day. But in the wake of protests of Floyd’s killing this year and against a backdrop of the coronavirus pandemic that has disproportionately harmed Black communities, more Americans — especially white Americans — are becoming familiar with the holiday and commemorating it.

“Black people came here against their will and made America what it is today,” said New Yorker Jacqueline Forbes, a Jamaican immigrant, who marched on the Brooklyn Bridge. “This is something we need to celebrate.”

Some places that didn’t already mark Juneteenth as a paid holiday moved in recent days to do so, including New York state and Huntington, West Virginia.

In Tennessee, Republican Gov. Bill Lee signed a proclamation Friday to recognize Juneteenth Day. The move came the week after Republican lawmakers voted to keep in place a day commemorating Confederate general and early Ku Klux Klan leader Nathan Bedford Forrest but remove the governor’s responsibility to sign the annual proclamation for it.

The growing recognition of Juneteenth comes as protests have started to yield concrete results, including policing reforms in several places.

In addition, longstanding demands to remove symbols and names associated with slavery and oppression were gaining momentum. Hundreds gathered Thursday night in an Atlanta suburb to watch a crane remove a Confederate monument that had stood in the town square since 1908. A Louisiana tourist commission abandoned a 19-year-old promotion touting “New Orleans Plantation Country,” saying it will focus instead on the region’s “whole story,” including the cruel history of slavery.

In Portland, protesters who took to the streets for the 22nd consecutive night Thursday tore down a statue of George Washington that was erected in the 1920s.

In addition to big marches, smaller events were also held. In Louisiana, community and environmental groups won a court fight to hold a Juneteenth ceremony at a site archaeologists have described as a probable cemetery for enslaved African Americans. Philadelphians staged impromptu celebrations after the city’s parade and festival were canceled because of the virus outbreak, and St. Petersburg, Florida, unveiled of a block-long, colorful mural that said “Black Lives Matter.”

“We know our lives matter. You don’t have to tell us that. We’re trying to tell the world that,” said Plum Howlett, a tattoo artist who painted part of the mural.

President Donald Trump issued a message for Juneteenth, which he said was “both a remembrance of a blight on our history and a celebration of our Nation’s unsurpassed ability to triumph over darkness.”

Trump had originally planned a rally in Tulsa, Oklahoma, on Friday, but changed the date to Saturday amid an uproar about his appearance on a date of such significance.

In New Orleans, demonstrators were greeted with bowls of red beans and rice.

“We celebrate Juneteenth in honor of the celebration of freedom, but guess what?” said Malik Bartholomew, one of the speakers who addressed the crowd there. “We also have to celebrate the fight.” 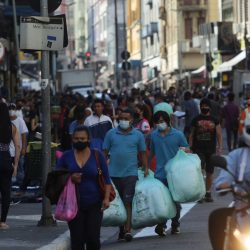