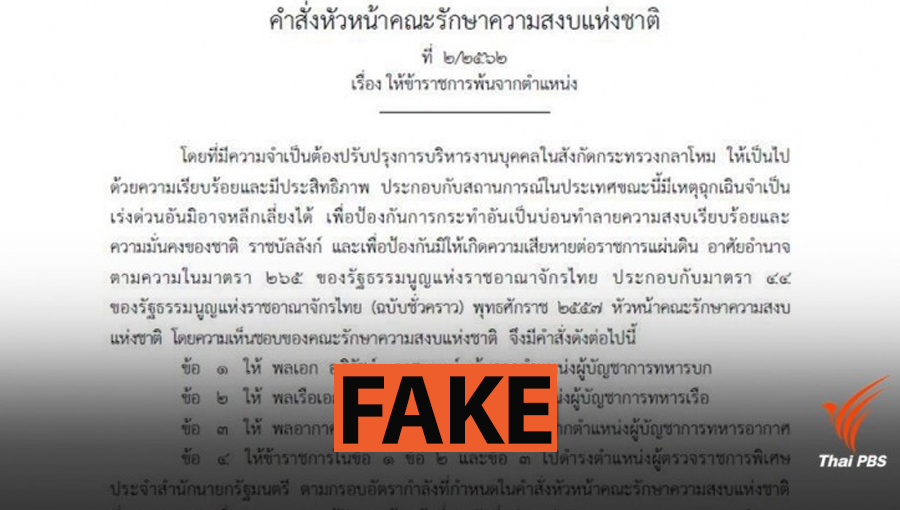 The government today dismissed what was purportedly an announcement by the National Council for Peace and Order (NCPO) relieving the commanders of the three armed forces as fake.

Assistant government spokesperson Colonel Thaksada Sangkhachan said this morning that the fake announcement, which was widely shared in the social media, was believed to be the work of people involved in spreading rumours of a coup.

The spokesperson said the Office of the Cabinet’s Secretary-General had assigned the assistant secretary-general of the cabinet to lodge a formal complaint with the police in order to track down the perpetrators and to take legal action against them.

“The announcement is a fake,” said Colonel Thaksada as she told people not to believe it while warning against the sharing of the fake announcement via social media as it might cause public confusion.

Meanwhile, it was reported that Army Commander-in-Chief, General Apirat Kongsompong, in his capacity as secretary-general of the NCPO, has ordered the junta’s legal team to lodge a complaint with the police against the maker or makers of the fake NCPO announcement.

The same source said that the NCPO, at its meeting this morning, instructed authorities concerned to monitor closely the political situation in the wake of the spread of fake news.