A total of 980 primary schools, or 70% of all the schools in Thailand’s north-eastern province of Nakhon Ratchasima, have suspended on-site classes in favour of online learning after clusters of COVID-19 infections were detected in several districts in the province.

In the latest development, the provincial health office reported clusters of infections in four schools on Monday, in the districts of Muang, Chakkarat, Bua Yai, and Phra Thong Kham.

At the Ban Charoenphol School, in Mab Krad sub-district, 42 students have been found to be infected, after the infection of a Prathom 3 student was reported on January 31st.

At the Rath Karoon Wittaya School, in Khlong Luang sub-district, 35 students and their relatives are infected and 149 others are listed as being in a high-risk group. On-site classes were suspended from February 9th until this Friday.

At the Ban Nong Pluang School in Po Klang sub-district, 42 students and their relatives have tested positive for COVID-19. On-site classes have been suspended since last Saturday, until February 21st, and online learning has been reintroduced.

At the Municipal School in Bua Yai district, which was regarded as an old cluster, 86 people, including 55 students, have been found to be infected. 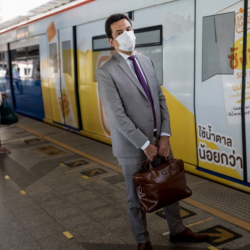