Eight provinces in the northeast, eastern and southern regions have been warned by the National Water Resources Office to brace for flash food and landslides due to accumulated rainfalls for the past seven days.

The eight provinces are Sakhon Nakhon and Muk Daharn in the Northeast, Prachin Buri, Trat and Chanthaburi in the East and Ranong, Phang-nga and Surat Thani in the South.

National Water Resources Office secretary-general Somkiart Prachamwong said that good cooperation from 38 relevant agencies in the implementation of this year’s water management plan has managed to prevent flooding in some areas and to mitigate the impacts from flooding in other areas.

He said the work plan is divided into two parts: the first part is about preparations ahead of the arrival of the rainy season and the second part concerns the utilization of weather forecast information, following up of water situation and setting of operational plan to deal with different levels of the danger of flooding.

Of these eight dams, two of them, Nam Oon and Kaeng Krachan, have water exceeding their capacities.

Mr Somkiart said water level in the Phetchaburi river has the tendency to drop to about 69 cm below the edges of the river banks due to the draining of water from the Kaeng Krachan dam to irrigation system on both sides of the river.

Water inflow to the Kaeng Krachan dam is dropping but may increase next week due to anticipated more rains, he added.

Meanwhile, the Meteorological Department predicted more continuous rains throughout the country with isolated heavy rains from the middle of this month until October due to strong low pressure trough looming over the upper part of the South China Sea and the southwestern monsoon covering the Andaman Sea. 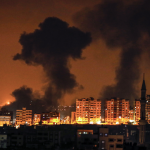 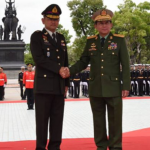