The Department of National Parks, Wildlife and Plant Conservation has announced a temporary closure of 42 waterfalls in national parks across the country in wake of the looming rainy season.

Spokesman of the department Mr Sompote Maneerat said Tuesday that officials at each national park were told to closely monitor water situation in the waterfalls and to immediately sound an alert if water level has risen to a point deemed endangering visiting tourists.

He suggested tourists to keep themselves informed about the waterfalls they want to visit and to follow the advice of field officials and all the warning signs for their own safety.

Mr Sompote explained that some of the waterfalls were to be closed for only a short period while others would be closed for a longer period, depending on the water situation in each waterfall.

At Nang Rong waterfall in Nakhon Nayok which was hit by massive run-offs from Khao Yai national park on Monday, red flags were put up to ban tourists from venturing into the waterfall although water situation has returned to normal.

However, officials were told to keep a close watch on water situation at Nang Rong waterfall and the stream in anticipation of more rains in the next couple of days. 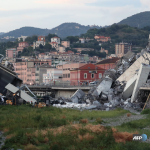