As many as 230 aftershocks have jolted Lombok Island, West Nusa Tenggara (NTB) Province, since the island was rocked by a powerful earthquake measuring 7 on the Richter Scale on Sunday evening, Antara news agency reported this morning.

Of the total 230 aftershocks, 16 were strongly felt by local inhabitants, Hary Tjatmiko, spokesman of the Meteorology, Geophysics, and Climatology Agency (BMKG) said in a statement.

More aftershocks were expected to occur in the next several weeks, he stated.

On Tuesday at 1:21 a.m. western Indonesian standard time (WIB), NTB was shaken by an earthquake measuring 5.5 on the Richter Scale.

The quake`s epicenter was located at 8.18 degrees southern latitude and 116.29 degrees eastern longitude, and at a depth of 10 kilometers (km), according to BMKG.

The tremor did not have the potential to trigger a tsunami.

Earlier, on Monday at 10:50 pm the province was also hit by a 5.4-magnitude earthquake, with its epicenter located at 8.37 degrees southern latitude and 116.04 degrees eastern longitude and at a depth of 10 km.

On Sunday, a powerful quake measuring 7 on the Richter Scale had devastated North Lombok, NTB, killing at least 98 people, and destroying hundreds of homes.

The BMKG had issued a tsunami early warning shortly after the quake and lifted it later at 9:25 p.m. local time on Sunday.

The epicenter of the quake was located at 8.37 degrees southern latitude and 116.48 degrees eastern longitude, some 18 km northwest of East Lombok District, and at a depth of 15 km.

The magnitude-7 quake almost had the same epicenter as the magnitude-6.4 quake that had hit the province on July 29 this year. The quake that struck on July 29 killed 17 people and damaged over one thousand homes, particularly in East Lombok District.

The tremor was also felt by those on Bali Island and part of East Java. 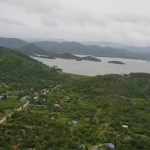 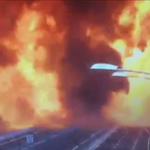