The incident took place late at night of April 30th, in front of the Prueksa Ville 44 housing estate on Borommaratchachonnani Road in Sam Phran district.

The two officers, Pol Cpt Chaiyapote Kotesamran, a deputy inspector with the Sam Phran police, and his subordinate, Lance Corporal Panadon Changkhien, went to Borommaratchachonnani Road to investigate gangs of youths reported to have been in the area, after receiving a 191 call.

Upon their arrival at the scene, they did not find any gangs, but decided to park the police pickup truck with the light flashing. A motorcycle headed towards them, travelling in the wrong lane, and it was stopped by the two policemen.

The bike’s driver and two pillion passengers were searched and a pistol was found on one of them. All three were ordered to remove their shirts and lie face down. They were then allegedly attacked by the two officers. The youth who had allegedly been carrying the gun was handcuffed and taken to the Sam Phran police station for further questioning and detention.

The father of the detained youth subsequently filed a complaint with Nakhon Pathom police, claiming that his son had been kicked and stomped upon by the two officers.

Pol Lt-Gen Thanayut Wuthicharasthamrong, commissioner of 7th Region Provincial Police, said he has summoned a meeting this afternoon with the two police officers, the superintendent of Sam Phran police and the deputy commander of Nakhon Pathom police to discuss the case, so that the public will be informed of what the police are doing to ensure fairness to all parties concerned. 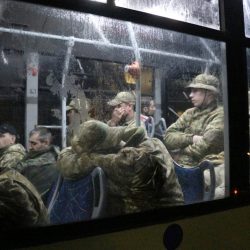 U.S., others walk out of APEC talks over Russia's Ukraine invasion - officials