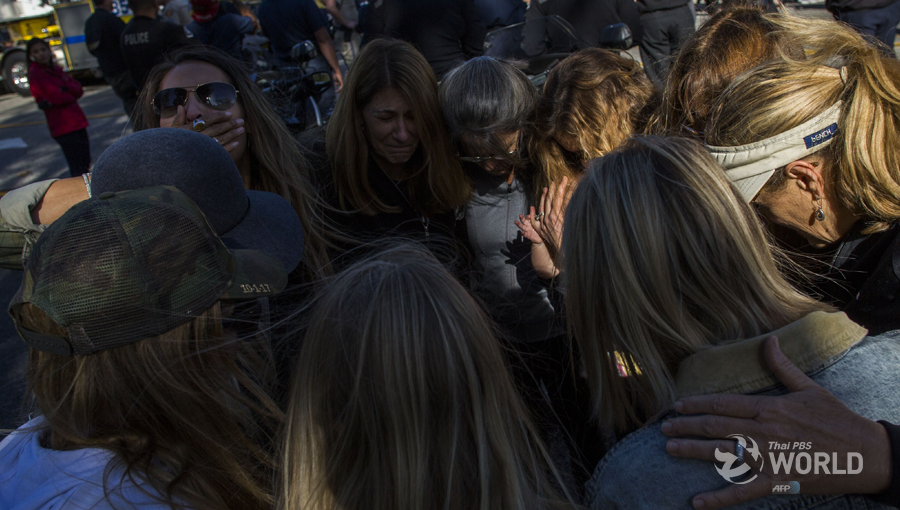 Friends hug outside the Los Robles Medical Center in Thousands Oaks, California on November 8, 2018, as they pay tribute to Ventura Country sheriff Sgt. Ron Helus who was killed in a shooting at Borderline Bar the night before.

The gunman, identified by authorities as Ian David Long, 28, was also found dead on Wednesday night in the office of the Borderline Bar and Grill, located in Thousand Oaks, a suburb about 40 miles from Los Angeles, apparently having shot himself.

Ventura County Sheriff Geoff Dean told a news conference on Thursday morning that Long was a Marine Corps veteran and had apparently fired at random with a .45-caliber Glock handgun with an extra-capacity magazine. There was no known motive.

He said authorities were obtaining a search warrant for Long’s home.

The Borderline is popular with university students and on Wednesday night was hosting College Country Night. California Lutheran University, located about 5 miles from the bar, canceled Thursday’s classes while Pepperdine University, about 20 miles away, planned a prayer service.

One of the victims was Sheriff’s Sergeant Ron Helus, a 29-year veteran of the department who died at a hospital, Dean said. Helus and a California Highway Patrol officer were the first to arrive at the bar and went inside just before 11:30 pm.

A statement from the sheriff’s office said there would be a procession in honor of Helus, who leaves behind a wife and son, on Thursday morning. “Ron’s selfless, heroic actions will never be forgotten,” the statement read.

SCENE LIKE “HELL”
Asked what the scene inside the bar was like, Dean said, “Like … hell.” Earlier he had described it as “a horrific scene in there. There is blood everywhere and the suspect is part of that.”

Long first shot a security guard outside the bar, stepped inside and resumed shooting, Dean said. Witnesses said Long had used smoke bombs to create confusion but Dean said that had not been confirmed.

Dean, speaking on his last day before retirement, said he had been told 150 to 200 people were in the Borderline at the time and that “it could have been much, much worse.”

Dean estimated 10 to 15 people, including one with a gunshot wound, had gone to hospitals. He said he thought their injuries were minor, and that most of them were likely injured as they escaped, some by breaking windows.

Dean told reporters that officers had gone to Long’s home in April in response to a disturbance call and had found him to be agitated. Mental health specialists talked with Long and determined that no further action was necessary.

Family members of possible victims or survivors of the shooting gathered at a teen center in Thousand Oaks for news of loved ones. A visibly distraught man was seen entering the building. 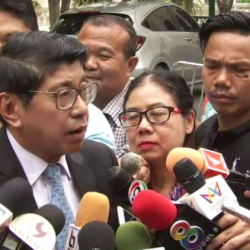