United Nations, United States (AFP) – The United States said Monday that it was expelling 12 members of Russia’s UN mission from America for being “intelligence operatives,” prompting a furious response from Moscow, which denounced what it called a “hostile move.”

A spokeswoman for the US mission to the UN said those ordered to leave had “abused their privileges of residency in the United States by engaging in espionage activities that are adverse to our national security.”

“We are taking this action in accordance with the UN Headquarters Agreement. This action has been in development for several months,” said the spokeswoman, Olivia Dalton.

Richard Mills, the US’s deputy ambassador to the UN, told a Security Council meeting on the humanitarian situation in Ukraine that the dozen had engaged in non-diplomatic activities.

“Those diplomats that have been asked to leave the United States were engaged in activities that were not in accordance with their responsibilities and obligations as diplomats,” he said, without elaborating further.

“This is a hostile move against our country,” Anatoly Antonov, Russia’s ambassador to Washington, said on Facebook, adding that Moscow was “deeply disappointed” and “totally rejected” the US claims.

Russia’s ambassador to the UN Vassily Nebenzia — who has not been targeted for himself for expulsion — informed reporters of the decision first in a highly unusual way.

While giving a press conference ahead of the UN meeting, Nebenzia asked reporters for a minute to answer a telephone message. He then revealed that he had just learned of the expulsion order issued by the United States.

A Russian diplomatic source later told AFP that the expulsion decision did not target either the ambassador or his two senior deputies, Dmitry Polyanskiy and Anna Evstigneeva.

“It’s bad news,” said Nebenzia, adding that the staff in question were to leave the country by March 7.

The Russian mission to the UN has around 100 staff, according to a Russian diplomatic source.

The announcement of the expulsion came on the last day of Russia’s rotating presidency of the UN Security Council, which changes every month. Russia is to cede the presidential seat to the United Arab Emirates on Tuesday.

The Russian diplomatic mission planned a reception later Monday to mark the end of its presidency, which has been marked, unprecedentedly, by its launch of a war against a neighboring country.

“It is not clear that there will be many guests,” one ambassador told AFP on condition of anonymity about this event which, unusually, no journalists were invited to attend.

Seven tips for a younger and healthier brain 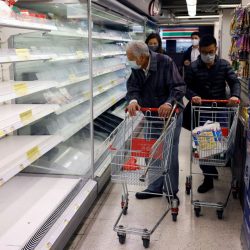