Future Forward party leader Thanathorn Juangroongruangkit may be in hot water over his alleged share-holding in a media organization which, if true, would be in violation of the Constitution.

According to Isra news agency, Thanathorn and his wife Raweepan, had owned a total of 900,000 shares, worth about nine million baht, in V-Luck Media Company. The shares were acquired on April 30th, 2018.

However, all of their shares in the media firm were reportedly transferred to Thanathorn’s mother this week, just days before Sunday’s election.

The news agency said Mrs. Somporn Juangroongruangkit, Thanathorn’s mother and member of the board of V-Luck Media Company, notified the Bangkok registrar about the new list of shareholders of the media firm minus the names of Thanathorn and Raweepan.

The share transfer occurred after the Future Forward party leader announced that he would transfer all his personal assets into a blind trust to set a new ethical standard for politicians.

Isra news agency said the shareholding by Thanathorn might contravene Section 98 of the Constitution which states that a shareholder in a media company is barred from contesting an election to become a member of parliament. A source close to the Future Forward party said the party’s legal team was considering the matter.

Political activist and secretary-general of the People Against Corruption Network, Mr. Veera Somkwamkid said today that Thanathorn might be disqualified for breaching the Constitution regarding a share-holding in a media organization.

“Thanathorn may fall off his horse before the election if the information from the Isra news agency is accurate.  Thanathorn Juangroongruantkit may lack the qualifications to become an MP.  The law stipulates that all the shares must be transferred before February 8th, 2019, but Thanathorn only transferred them on March 18th,” wrote Veera in his Facebook post today. 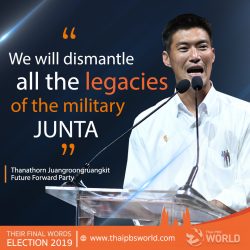