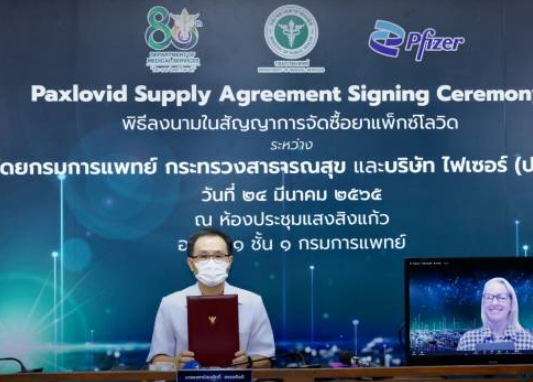 The Thai Medical Services Department signed an agreement with Pfizer (Thailand) today (Thursday) to procure 50,000 courses (2 million tablets) of the Paxlovid anti-viral medicine for the treatment of COVID-19.

The delivery of the drug is expected in mid-April.

Director-General of the department Dr. Somsak Akksilp said that the oral medication can reduce the risk of hospitalisation and death in severe COVID-19 cases by about 88%, if administered within five days of first symptoms being detected, according to clinical trials. This was high enough for the US National Institutes of Health to prioritise the drug over other treatments.

Paxlovid consists of nirmatrelvir and ritonavir co-packaged for oral use. The dosage is three pills, two of nirmatrelvir, which inhibits the COVID-19 protein from replicating, and one of ritonavir, a drug that was once used to treat HIV/AIDS.

From the trials, only 0.77% given the medicine were hospitalised and there were no fatalities, while 6.31% of those given a placebo were hospitalized and 13 died.

He explained that Paxlovid is appropriate for the infected who have not yet developed or have mild symptoms and are at risk of developing severe symptoms, such as the over 60s, diabetics, those with heart disease or stroke, chronic kidney disease or are immunocompromised.

The procurement of Paxlovid from Pfizer is in addition to two other anti-viral treatments already received by Thailand. Over a week ago, the Medical Services Department took delivery of two million tablets, or 50,000 courses, of Molnupiravir from Merck. 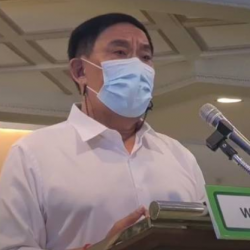 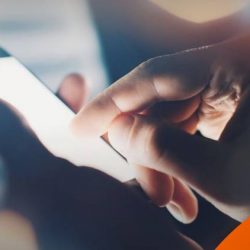