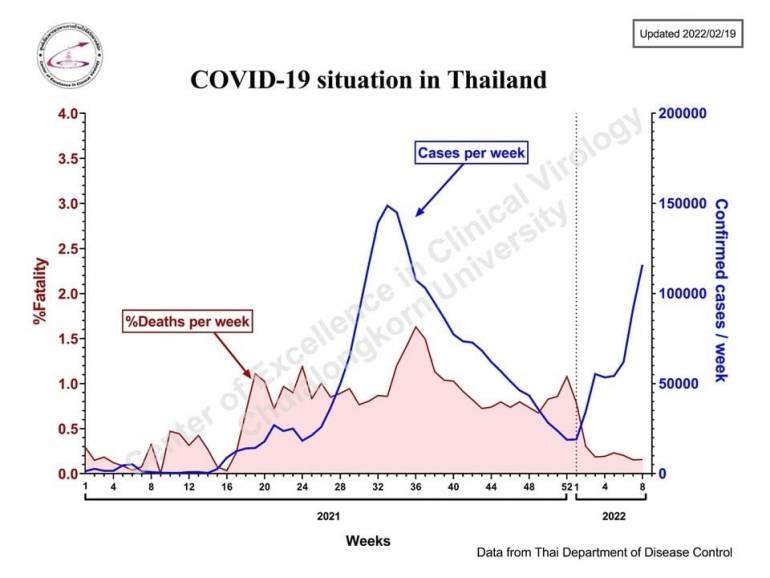 Respected virologist Dr. Yong Poovorawan said today (Sunday) that COVID-19 Omicron variant infections are on the steady rise across Thailand, averaging 25,000 cases a day and the number may surge to 100,000 cases a day in the future.

Judging by the rapid transmissibility of the BA.2 sub variant of the Omicron variant reported in Singapore, where daily infections average about 15,000 in a population one tenth the size of Thailand’s, Japan’s or South Korea’s, he said that Thailand may soon fall into the same pattern.

Dr. Yong, head of the Centre of Excellence in Clinical Virology at the Faculty of Medicine of Chulalongkorn University, pointed out that the current rate of infection is ten times that of the four previous waves in the country.

He noted, however, that it must be accepted that infections must reach their peak, before they start to stabilise and fall, as they did in Europe and America.

With the likelihood that daily COVID-19 infections will continue to rise, Dr. Yong said that the most logical thing for everyone to do is to reduce their risk of infection. Those who test positive should isolate at home or in community facilities and get their infection confirmed by a RT-PCR test.

Suppose 100,000 take RT-PCR tests a day, which cost an average of 1,000 baht each, the cost for one day would be about 100 million baht, he said, adding that it is impossible for all of the infected, in that scenario, to be admitted to hospitals.

Big-bike confiscated and rider fined for dangerous driving in Bangkok