Two prominent protest leaders, Parit “Penguin” Chivarak and Ms. Panasaya “Rung” Sitthijirawattanakul, were booked by Chanasongkhram police after they were released on bail from Tanya Buri prison in Pathum Thani province this afternoon.

The two protest leaders were supposed to be released last night, after the Appeals Court granted them bail, on the condition that they must not repeat the same alleged offences again. The court’s order, however, was made after the prison’s gate had already been shut for the night, so they had to spend another night behind bars.

When they were released this morning, police from the northeastern province of Roi-et were already waiting for Parit, armed with a court issued arrest warrant for alleged sedition, related to a protest rally held in Roi-et on September 3rd, but Parit refused to sign a document to acknowledge the charges.

Later, Chanasongkhram police arrived at Tanya Buri prison with arrest warrants for both Parit and Ms. Panasaya. Both were eventually escorted to Region 1 Border Patrol Police camp in Pathum Thani for questioning.

Another protester, Nutchanon Pairote, who was also granted bail by the Appeals Court, was released. 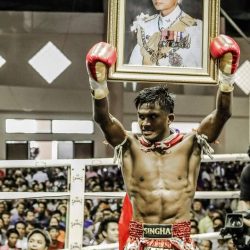