At least six employees of a company, which leased its sound system to protest organizers at Rajprasong yesterday, have been detained by police for questioning, according to the Centre for Human Rights Lawyers.

Officials at the centre said that the five men and one woman were detained by police as they were collecting sound equipment from the protest site at around midnight last night, after protesters had dispersed.

The officials said that police allowed the employees of the company, located in Ayutthaya province, to call their relatives for about ten minutes and then confiscated their smart phones and took them to the Region 1 Border Patrol Police camp in Pathum Thani for questioning.

The identities of the six people had not been released at the time of this report.

Police had earlier warned that those who provide trucks equipped with sound systems to protesters will face arrest for abetting the protest in violation of the state of emergency.

Meanwhile, the Paki Salaya, a network connected to the Khana Ratsadon group, reported in its Facebook page early this morning that its guards and nurses, who were deployed to provide health services to the protesters at Rajprasong yesterday, were also taken into custody as they were leaving the protest site.

It is not currently known to where they were taken, said Paki Salaya.

The protest ended at 10pm last night and its leaders announced that it will resume at 5pm today at the same venue.

The original demands of the protesters, which are the immediate resignation of the Prime Minister, a new Constitution and sweeping reform of the Monarchy, have been expanded to include no national government in if the Prime Minister resigns.

Despite the arrest of key protest leaders Anont Nampa, Parit Chivarak and Ms. Panasaya Sitthijirawattanakul, supporters of the Khana Ratsadon continue to respond to Twitter calls to continue the protests. 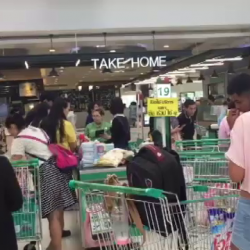