The spillover of water at the spillway of Kaeng Krachan dam in Phetchaburi today is the first time ever in 15 years of the history of the dam mainly due to a huge water mass, estimated at 160 milllion cubic metres, that poured into the dam on one single day on July 19 as a result of Sin Tinh storm and southwestern monsoon.

On Wednesday, water in the dam was estimated at 734 million cubic metres or 103 percent of its capacity and the overflow spilled over the spillway for the first time in 15 years.

Meteorological Department chief Wanchai Sak-udomchai said the seasonal monsoon which has gained strength would cause heavy rain upward of Kaeng Krachan dam which would eventually flow in the dam.

The Weatherman warned of rain in all parts of the country today and tomorrow with warning of flash flood in Chanthaburi, Phetchaburi, Ratchaburi, Prachuab Khiri Khan, Ranong and Phang-nga. 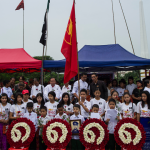