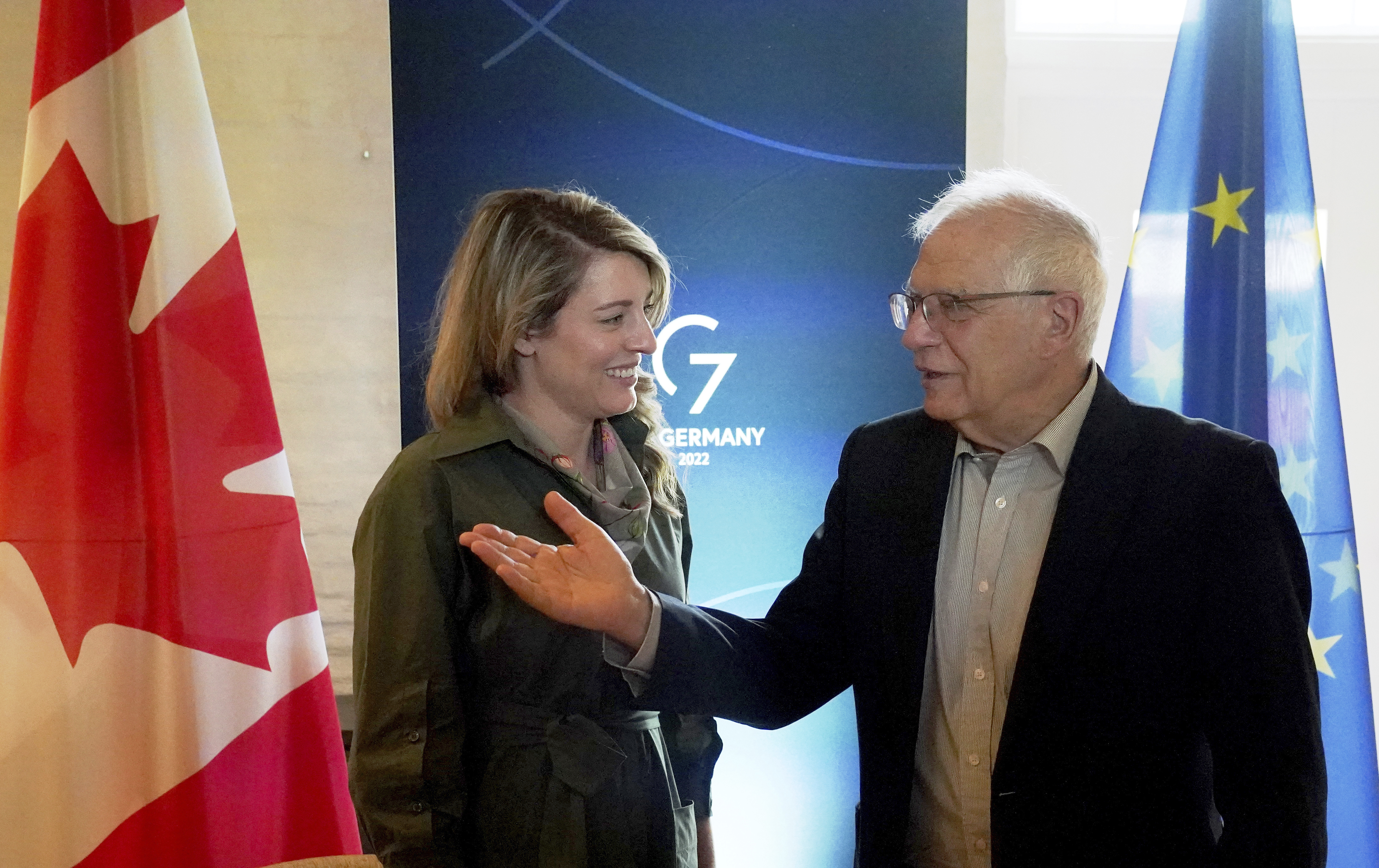 Melanie Joly, left, Foreign Minister of Canada, and Josep Borrell, right, EU High Representative for Foreign Affairs and Security Policy, talk after their bilateral meeting during the the summit of foreign ministers of the G7 Group of leading democratic economic powers at the Weissenhaus resort in Weissenhaeuser Strand, Germany, Saturday, May 14, 2022. (Marcus Brandt/Pool via AP)

WEISSENHAUS, Germany (AP) — The Group of Seven leading economies warned Saturday that the war in Ukraine is stoking a global food and energy crisis that threatens poor countries, and urgent measures are needed to unblock stores of grain that Russia is preventing from leaving Ukraine.

“Up to 50 million people, particularly in the countries of Africa and the Middle East, will die in the next few months,” she warned, unless ways are found to release Ukrainian grain, which accounts for a sizeable share of the worldwide supply.

In statements released at the end of the three-day meeting on Germany’s Baltic Sea coast, the G-7 pledged to provide further humanitarian aid to the most vulnerable.

“Russia’s war of aggression has generated one of the most severe food and energy crises in recent history which now threatens those most vulnerable across the globe,” the group said.

“We are determined to accelerate a coordinated multilateral response to preserve global food security and stand by our most vulnerable partners in this respect,” it added.

Canada’s foreign minister, Melanie Joly, said her country, another major agricultural exporter, stands ready to send ships to European ports so Ukrainian grain can be brought to those in need.

“We need to make sure that these cereals are sent to the world,” she told reporters. “If not, millions of people will be facing famine.”

The G-7 nations also called on China not to help Russia, including by undermining international sanctions or justifying Moscow’s actions in Ukraine.

Beijing should support the sovereignty and independence of Ukraine, and not “assist Russia in its war of aggression,” they said.

The G-7, which comprises Britain, Canada, France, Germany, Italy, Japan and the United States, also called on China “to desist from engaging in information manipulation, disinformation and other means to legitimize Russia’s war of aggression against Ukraine.”

The meeting in Weissenhaus, northeast of Hamburg, was billed as an opportunity for officials to discuss the broader implications of the war for geopolitics, energy and food security, and ongoing international efforts to tackle climate change and the pandemic.

In a series of closing statements, the G-7 nations also addressed a wide range of global problems from the situation in Afghanistan to tensions in the Middle East.

On Friday, Ukrainian Foreign Minister Dmytro Kuleba appealed to friendly countries to provide more military support to Kyiv and increase the pressure on Russia, including by seizing its assets abroad to pay for rebuilding Ukraine.

Kuleba said his country remains willing to talk to Russia about unblocking grain supplies stuck in Ukraine’s silos and also about reaching a political agreement to end the war itself, but had so far received “no positive feedback” from Moscow.

German Chancellor Olaf Scholz said in an interview published Saturday that he had not detected any change in Putin’s stance recently.

Scholz, who spoke at length by phone with the Russian leader Friday, told German news portal t-online that Putin had failed to achieve the military objectives he set out at the start of the war while losing more Russian soldiers than the Soviet Union did during its decade-long campaign in Afghanistan.

“Putin should slowly begin to understand that the only way out of this situation is through an agreement with Ukraine,” Scholz was quoted as saying.

One idea discussed at the G-7 meeting was whether Russian state assets frozen abroad can be used to pay for the reconstruction of Ukraine.

“Russia bears responsibility for the massive damage resulting from this war,” Baerbock said. “And that’s why it’s a question of justice that Russia should have to pay for this damage.”

But she added that, unlike in Canada — where legislation allows for seized funds to be repurposed — the legal basis for doing so in Germany is uncertain.

“But that’s precisely what such meetings are for, to have an exchange about how to resolve these legal questions,” Baerbock said.

Many of the foreign ministers were due to attend an informal meeting of NATO diplomats in Berlin on Saturday and Sunday.

That gathering will consider moves by Finland and Sweden to join the military alliance amid concerns about the threat from Russia, as well as ways in which NATO can support Ukraine without being drawn into the conflict.

U.S. Secretary of State Antony Blinken, who was unable to attend the G-7 meeting after recovering from a COVID-19 infection, was expected at the NATO gathering. 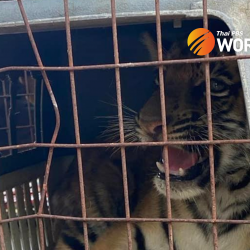 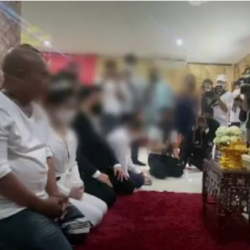