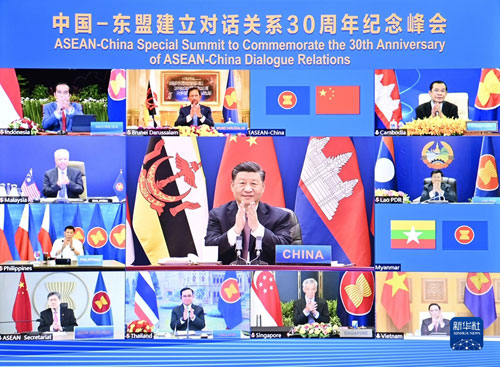 Chinese President Xi Jinping with ASEAN leaders in a virtual summit on November 22, 2021. Photo courtesy of the Chinese Embassy in Bangkok.

Attending the ASEAN-China summit for the first time in the three decades of their relations this morning, China’s President Xi Jinping made a strong impression on the ASEAN leaders in terms of his country’s conviction and determination regarding the relationship with ASEAN. He wanted to assure the ASEAN leaders that China will neither seek hegemony nor bully smaller countries.

In his opening remarks, he outlined new trajectories for the future ASEAN-China cooperation. Highlights of his remarks focused on China’s relations with its smaller neighbours, vaccines, peace and development.

He reiterated that China has been and will forever be a good neighbour to ASEAN and its partner. The key to ASEAN-China relations has been unwavering support of ASEAN centrality in the regional framework and its greater role in regional and international affairs.

To help alleviate the COVID-19 pandemic, Xi said that China will donate an additional 150 million doses of vaccines to ASEAN and US$5 million to the grouping’s COVID-19 Response Fund, as well as step up joint vaccine production and technological transfers. On the top of these efforts, China has pledged to provide ASEAN with US$1.5 billion of development assistance for the next three years, to combat the coronavirus and accelerate economic recovery.

As regards the security dialogue and cooperation, China has urged ASEAN to stick to existing partnerships, instead of forming new alliances. China has called on the grouping to strengthen the partnership between the two further and this helps to explain why China has placed so much importance on status, such as the Comprehensive Strategic Partnership (CSP).

It was also seen as a rebuke of the new military alliance formed recently between the US, the UK and Australia, known as AUKUS. China has formed various types of strategic partnerships with more than 150 countries around the world.

Xi repeated that China is ready to sign the Treaty of Southeast Asia Nuclear Weapon-Free Zone (SEANFWZ) as early as possible. It has long been the position of ASEAN to have all the big five (the US, the UK, France, Russia and China) sign the SEANFWZ simultaneously. China was the first dialogue partner to accede to the Treaty of Amity and Cooperation in 2003.

In a new development, Xi also said that China seeks high-quality “Belt and Road” cooperation with the ASEAN Outlook on the Indo-Pacific (AOIP). This was the first time that the Chinese leader has made clear its association with AOIP. Since its inception, Beijing has viewed various Indo-Pacific frameworks as attempts to contain China’s rise. ASEAN has reiterated to China that the AOIP is an initiative which is inclusive by nature and seeks all forms of cooperation with dialogue partners.

He also referred to the current situation in the South China Sea, saying that joint efforts are needed to safeguard stability and make it a sea of peace, friendship and cooperation. ASEAN and China are expected to complete the code of conduct for the South China Sea by next year. COVID-19 has, however, delayed face-to-face negotiations.

The new ASEAN chair, Cambodia, has invited the members of the working group to meet in person in the second half of next year, to accelerate the negotiations. In this connection, Cambodia also plans to issue a joint statement, on the commemoration of the 20th anniversary of the Declaration on the Conducts of Parties in the South China Sea, which would require consensus from both sides.

It is clear that both sides have a long list of what must be done to increase mutual trust, respect and benefits. Given the geographical proximity and close cultural relations, China and ASEAN are bound by a common vision for peace and prosperity. 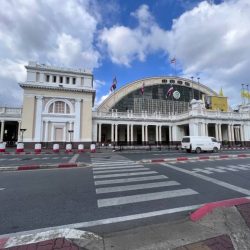 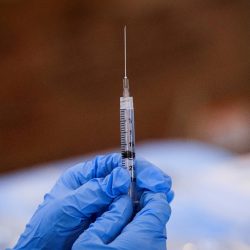