“For me, [surfing is] my profession, so it is something that I can do every day. I’m trained at it, it is what I do and it is how I live now.”

Surfing with a Thai flag

Meet Annissa Flynn, a Thai-Australian surfer who is best known for her silver medal in the 2019 Southeast Asian Games. Before the COVID-19 pandemic, Anni also won three World Flow-boarding Championships and was ranked first in the Thai Surf Championships in 2020.

Most importantly, Anni will be representing Thailand in the WSL Asian Qualifying Series in Indonesia this June. This will also be an opportunity for her to tell the world that Thailand is also a great place to surf and there are many Thai surfers who have the potential to compete.

“Well it’s an honor, first and foremost, because I did start surfing here in Phuket, and I’m excited to represent my country on the world stage.”

In terms of her preparation, she has been going back to her coach, who trained her for the 2019 Southeast Games, in order to get physically ready for the competition.

“So I’ve been training at the gym, surfing every day that I can and just getting my technique right. It’s a lot of repetition and progression that I’m doing at the moment.” 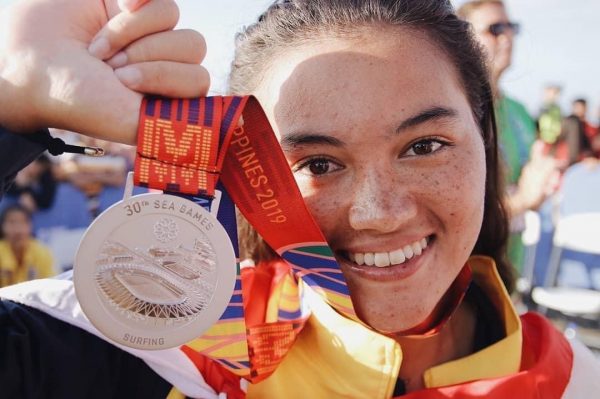 Life is exciting on the waves

Born in Australia and growing up on Thailand’s famous resort island of Phuket, Anni began surfing when she was only 8-years-old. As Anni explains, she has always been into sports, thanks to her father. In fact, she started with wakeboarding, before she fell in love with surfing.

“As soon as I touched a surfboard and got my first wave, I was hooked.”

Her favourite sport grew into her passion, as Anni enjoyed competing on the surfboard with her friends, which made her realise that she should pursue surfing as a career.

“Living in Phuket, I’m always by the beach,” she said. “So they had competitions back then. I and my three friends were like, let’s go, let’s do it, let’s try competing. I just loved it and have strived to keep this dream going ever since I was little.”

For many people, surfing is just a hobby, but not for Anni. Competitive surfing gives her the drive to become better, compared to surfing recreationally.

“Well, you can be driven to a certain point [as a hobby], but I feel like competing really drives you to be better. So, you’re constantly looking at other surfers to see how you can change a technique or even get better. So it’s always like climbing an endless ladder if you’re competing.” 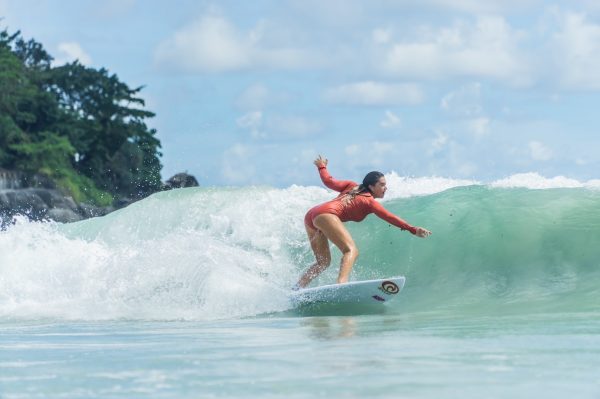 Surfing can also be perceived as a male-dominated sport. Nonetheless, Anni doesn’t feel intimidated by being surrounded by male surfers, as her only focus is to catch a wave. She does admit, though, that sometimes it can be slightly intimidating when she competes outside of Thailand, being lined up with the boys.

“But, you know, if you let that get to you, you’re not going to catch a wave,” Anni explains. “If you’re at the beach, you are there to surf. So, after sitting in the water for about 30 minutes, trying to suss-out the lineup, you kind of just go, okay, I have got to catch a wave.”

Despite the challenges of the sport, Anni is proud and excited to see that the number of female surfers is significantly increasing in Thailand, compared to when only five female surfers were seen.

“I have seen exponential growth in women’s surfing,” she said. “Now I see a lot of new faces and I am loving it. They are in competitions, they are paddling out, they’re making their lives and I love it.”

As for her future plans, after the WSL Asian Qualifying Series, Anni told us that she will be looking for the next surfing competition in which to participate. If there aren’t any, Anni still wants to travel to different places where she can improve her surfing skills.

“The waves here in Phuket, we get six months on, six months off. So, during the off-season, I really want to find anywhere [where I can surf]. The closest place with the best waves would be Bali, so I might plan a trip to do some training, get a coach there, [to do] videography and all of that.”

As to what keeps her focused on her goals, the Thai-Australian surfer feels that it’s her inner drive that keeps her going. At the same time, her fellow competitors and idols inspire her to become better.

“I feel like, when I go to compete, I feel out of place and at home at the same time,” she says. “The feeling is kind of weird, but you always see really good surfers. If I see someone who is my idol out in the water, I can see how they catch the wave, how they drive through their turn, it’s inspiration for me to keep going and be better.” 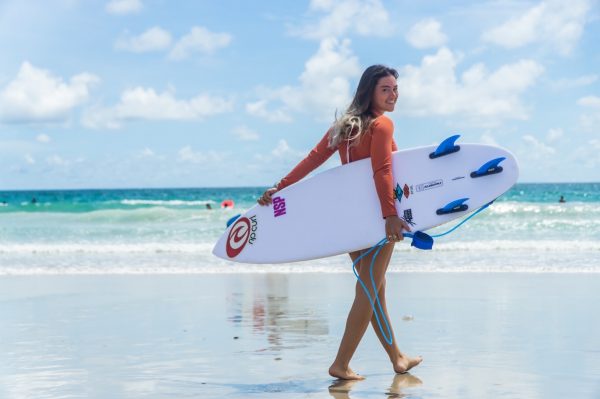 Whatever you want to do, you will make it possible

For the past 16 years Anni has been dedicated to competitive surfing, but what she really wants to do now is to pave the way for more Thai female surfers in international competitions. Most importantly, she hopes that her journey will inspire more young girls to do the same.

“At the moment, there is no female Thai surfer that is going through the WSL. I feel like I am the first person to pave the way for that. So, I just want to keep doing what I’m doing and hopefully inspire some girls to want the same.”

When asked what she would like to say to young girls who want to pursue surfing, or compete in any male-dominated sport, her top advice is to just “go for it”.

“Honestly, those things can feel intimidating but, if it’s something that you want to do, I want to tell you that you can do it, put your mind to it and, whatever you want to do, you will make it possible.” 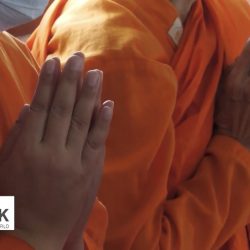 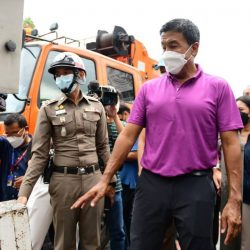 No honeymoon, only huge challenges and expectations for new Bangkok chief Chadchart