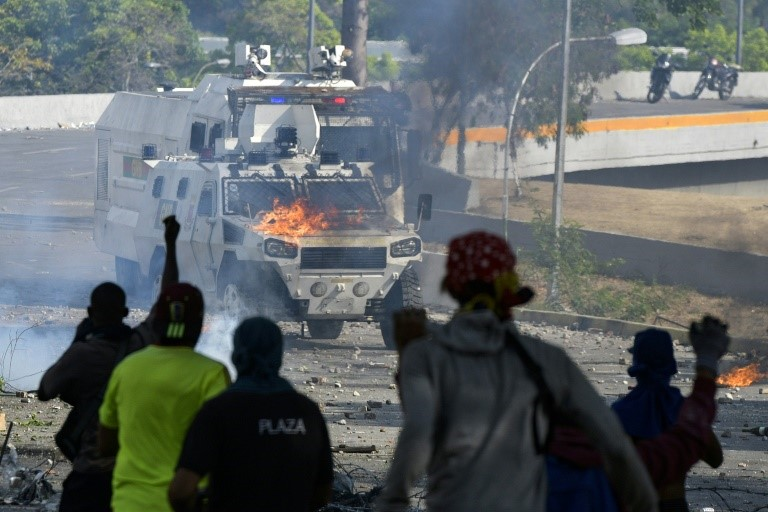 CARACAS, July 17 (Reuters) – A young man was shot to death in a fishing village in Venezuela during a protest over gasoline rationing, opposition deputies and a local human rights group said on Friday.

Jose Luis Albornoz, 19, died Thursday of a shot to the chest allegedly fired by a member of the National Guard, which was clearing the protest on Toas Island in northwestern Zulia state, said Avilio Troconiz, an opposition deputy.

Gasoline had been arriving to the island once a month and stations had been selling the allotted 120 liters per person under a government rationing system, but on Thursday the guard reportedly wanted to restrict sales to 60 liters, sparking protest, Troconiz told Reuters. “The guard reacted with bullets and that is when they killed the boy.”

Around 90% of the population on small, remote Toas Island sustains itself from fishing. The community alleged the ration cut would not give them enough gasoline to power their boats, Troconiz added.

“Witnesses say Bolivarian National Guard officials who repressed the protest were allegedly responsible,” the non-governmental Zulia Commission for Human Rights (Codhez) said in a statement, adding the fisherman had no fuel for days.

The information ministry did not immediately respond to a request for comment.

Venezuela is facing new fuel shortages after a momentary relief in June due to the arrival of gasoline from Iran.

Data provided by Venezuela to the Organization of the Petroleum Exporting Countries earlier this week showed June crude output had fallen to a 77-year low as U.S. sanctions choked off exports.

Production has been falling since 2016 due to underinvestment and mismanagement, three years before the U.S. sanctions on Petróleos de Venezuela, S.A., or PDVSA.

Fuel shortages have plagued the OPEC nation. In June 2019, a man was shot to death at a gas station in the northwestern Merida state while waiting in a line of hundreds of cars for fuel. (Reporting by Mariela Nava and Vivian Sequera; Writing by Sarah Kinosian; Editing by Richard Chang) Trump says he will not consider a national mask mandate