A doctor and nurses from Klaeng district hospital in Thailand’s Rayong province helped a pregnant woman give birth to a healthy baby on a pickup truck, which was marooned in heavy flooding in front of the hospital last night.

A medic said that the truck could not get to the hospital in time, because the access road was heavily flooded, so the medical staff decided to perform the delivery on the truck, which was parked at the roadside.

The birth took about half an hour and the mother and her new-born baby were then stretchered into the hospital.

The woman’s relatives and medics cheered and applauded after the successful delivery.

Several areas in Rayong were flooded last night, with water depth in some low-lying areas measured at about one metre. Electricity outages were also reported in several areas.

Local residents said that the flash flood came so fast that they were caught off-guard and were unable to move their valuables to higher ground in time. 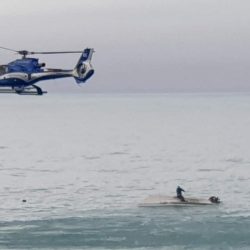