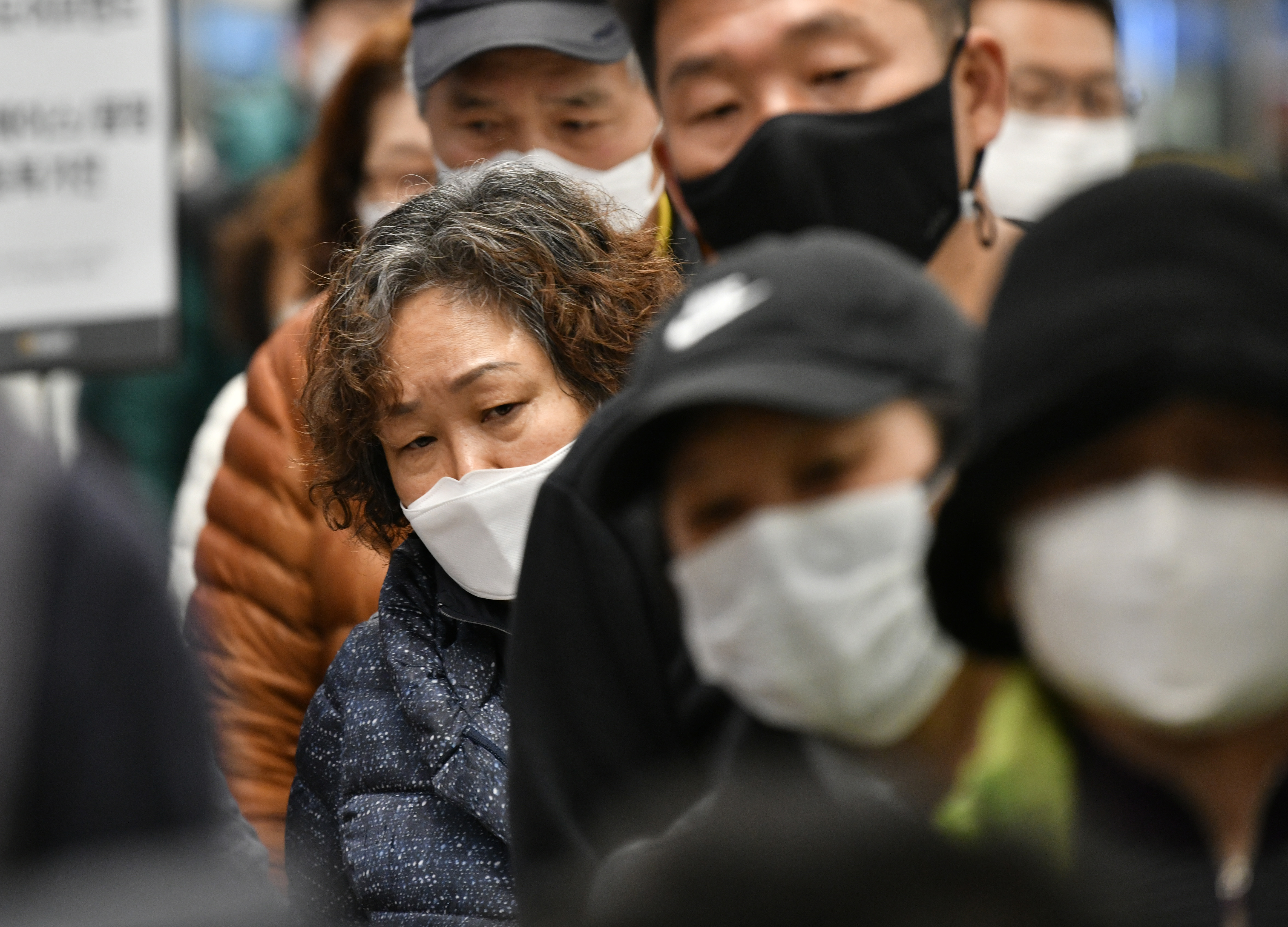 People wait in a line to buy face masks at a retail store in the southeastern city of Daegu on February 25, 2020. – South Korea reported 60 more COVID-19 coronavirus cases on February 25, the smallest increase for four days in the Korea Centers for Disease Control and Prevention’s morning updates. The country now has 893 cases. (Photo by Jung Yeon-je / AFP)

The new coronavirus has peaked in China but could still grow into a pandemic, the World Health Organization has warned, as infections mushroom in other countries.

Financial markets have gone into a tailspin after grim news of deaths and outbreaks in the Middle East, Europe and Asia, even as the Chinese epicentre appeared to be calming, with the death toll at its lowest for three weeks.

But the situation is worsening in other countries, with more than 2,000 cases and 30 deaths reported abroad, prompting a raft of restrictions on travellers from infected nations.

South Korea, Italy and Iran have logged particularly sharp increases in infections and deaths, while several countries in the Middle East reported their first cases of the novel coronavirus.

But WHO chief Tedros Adhanom Ghebreyes insisted the virus could still be contained, praising China’s drastic quarantine measures in several cities for helping to prevent an even bigger spread.

He added, however, that countries should be “doing everything we can to prepare for a potential pandemic.”

The term “pandemic” is used to describe an illness that spreads across numerous communities.

South Korea, which has the largest number of cases outside China, reported 60 more infections and one more fatality on Tuesday, raising its death toll to eight and total patients to nearly 900.

South Korea’s outbreak has centred around a religious sect in Daegu, the country’s fourth largest city.

The country is on its highest “red” alert. As part of the containment efforts, school holidays were extended nationally while the 2.5 million people of Daegu were told to remain indoors.

The US Centers for Disease Control raised its caution level to warn Americans against “all nonessential travel to South Korea”.

Italy, which has reported seven deaths and over 200 cases, has locked down 11 towns, while upcoming football matches in its Serie A and the Europa League will be played behind closed doors.

With police manning checkpoints to enforce a blockade, Prime Minister Giuseppe Conte has said that residents could face weeks of lockdown.

At least 12 people have died in Iran, the highest toll outside China.

But there were concerns the situation might be worse than officially acknowledged. The semi-official ILNA news agency quoted one local lawmaker in hard-hit Qom — a religious centre — who said 50 people had died there.

The Iranian government denied the report, and pledged transparency.

Even so, authorities have only reported 64 infections in Iran, an unusually small number that would mean an extremely high mortality rate.

Michael Ryan, head of WHO’s health emergencies programme, said a team from the UN agency would be arriving in Iran on Tuesday.

But he cautioned against drawing any conclusions about the mortality rate. Iran “may only be detecting severe cases” because the epidemic was still at an early stage, he said.

Several countries have taken measures to prevent arrivals from Iran.

In China, 508 new cases were reported, with all but nine at the epicentre in central Hubei province. Although that was up from 409 on Monday it was much lower than new infections being reported just a week ago.

WHO’s Tedros said the epidemic peaked in China between January 23 and February 2.

China has placed some 56 million in Hubei and its capital under quarantine since late last month, while other regions have enacted some forms of travel curbs and measures to keep millions more people indoors.

Bruce Aylward, leader of a WHO mission of international experts, said late Monday it was time for China to start lifting some of the restrictions.

“Obviously they want to get society back to a more normal semblance of what probably is the new normal, because this virus may be around… for months,” Aylward said.

Reflecting the disquiet, global markets plunged on Monday, with Wall Street off 3.6 percent.

Bargain buying helped some Asian markets into the green on Tuesday, but disquiet remained, with Tokyo dropping 3.0 percent by lunchtime.